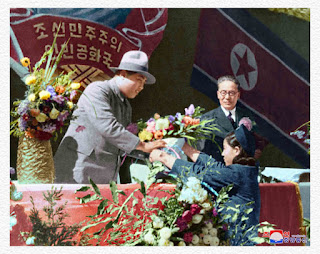 The  International Central Committee for the Study of Songun Politics issued the following statement on  the 73rd anniversary of the foundation of the Democratic People's Republic of Korea by the great leader President KIM IL SUNG :

On the 9th of September the 1948, 73rd years ago , the Democratic People's Republic of Korea was founded by President KIM IL SUNG . The foundation of the DPRK represented the will and aspirations of the Korean people to found an independent unified state.

During more than seven decades of its existence the DPRK has withstood all kinds of harsh trials  imposed by hostile forces . Thanks to the leadership of President KIM IL SUNG and Chairman KIM JONG IL  the DPRK has won victory after victory under the banner of Songun .

The International Central Committee for Songun Study salutes the DPRK on the  73rd anniversary of its foundation! We believe that final victory is in store for the DPRK under the leadership of dear respected Marshal KIM JONG UN