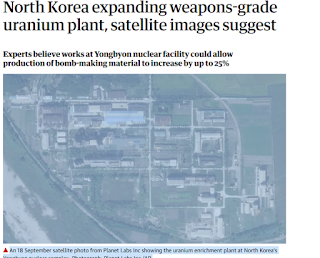 An example of anti -DPRK propaganda from that old favourite of the chattering classes the ‘Guardian ‘ ( it took a long time for the Left in Britain realise that the ‘Guardian' is not their friend but that is another story ) .

Let's deconstruct  the story shall we ?   . Looking at we find the following elements ;

-It is syndicated story , identical stories appear in other news outlets and networks

-The so -called information comes not from inside the DPRK but a US based ‘think tank ‘ in California , thousands of  miles from the DPRK

-No DPRK official or spokesperson is quoted in the article

-Absence of hard evidence but plenty of supposition , speculation  and conjecture .

There is no way of knowing what the new building in the picture is for ? We are told that it is a uranium enrichment plant but we only have their word for it . How do we know that the building hasn’t always been there ? Is it really new ?  Can it really increase ‘increase the production of weapons-grade plutonium by as much as 25 percent’ ? . How do they know ? Is this just a wild guess ? Is it a case of ‘make it short , make snappy and make it up ? .

Even if the story about the expansion of the plant is true there is no proof that it is intended to produce nuclear weapons ? It could be used for peaceful civilian use . It makes sense for the DPRK to push ahead with the development of nuclear power because hydro -electric power stations do not function during times of drought and coal fired power stations can cause pollution .

Do not rely on the mainstream media who recycle reports from dodgy American think tanks  ! . Why not come to our meetings and events such as the one we have planned for the West of England on the 26th of September in Taunton . In KFA you can hear from people who have visited the DPRK  instead of looking at fake satellite images of the DPRK .