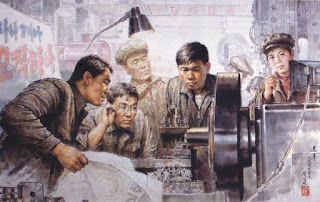 Social, economic, ideological, and cultural progress in the early 21st century, in most countries of the world, except the Democratic Peoples Republic of Korea is being held back. In the nations of imperialism and in the developing world decaying capitalism is endeavoring to strangle the advance of production & technique, to arrest the growth of human & material forces, to check science and culture, and to crush the development of ideas and thought all in the name of class domination. This path to which the bourgeoisie is turning in all countries is that of human decay and social decline.  In the Democratic Peoples Republic of Korea, the reverse movement has occurred, the road of true human creativity and innovation has been opened up. In the DPRK the social wealth and social relations are the common wealth of society.  Juche Korea there is a continual flowering of all the talents and resources of the whole people, the masters of everything in socialist society. The Juche Idea provides the inspiration for further social progress of humanity using the attributes of creativity and consciousness over the destruction, decay, and barbarism of capitalism in the 21st century!