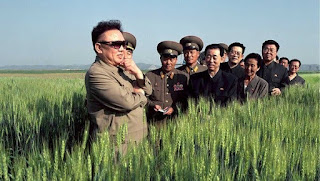 On June 19, 1964 Kim Jong Il (1942-2011), the eternal General Secretary of the ruling Workers’ Party of Korea, started working at the Central Committee of the Party.

His start of working at the WPK Central Committee–this was of epochal significance in its development.

His leadership enabled the WPK to hold up the Juche idea authored by President  Kim Il Sung, the founder of the WPK, as its immutable guiding ideology, guiding ideal.

The Juche idea, which clarifies that one is responsible for one’s own destiny and one has also the capacity for shaping it, is the ideology showing the way for the masses of the people to shape their own destiny by their own efforts.

In those days the leadership authority of the leaders of the ruling parties in several socialist countries was being abused and the world socialist movement was experiencing difficulties and trials, but the WPK consolidated its organizational and ideological unity and cohesion centred on the leader, thus safeguarding and adding lustre to the cause of party building of the leader. This is inconceivable apart from the leadership of      Kim Jong Il.

Through energetic ideological and theoretical activities, he proved that the Juche idea is a new and original revolutionary ideology which reflects the interests of the masses and the requirements of the era of independence, and established the WPK’s leadership system.

In the 1960s he developed the WPK into one which possessed strong organization and fighting efficiency. In the 1970s he proclaimed modelling the whole society on Kimilsungism as the ultimate programme of the WPK and achieved its unity and cohesion on the basis of the Juche idea.

In the 1980s he wisely led the struggle of creating a new speed in building the socialist economy, thus bringing into bold relief the image of the WPK as a revolutionary and militant party.

In the 1990s after the demise of President Kim Il Sung (July 8, 1994), he set forth the slogan “Let us arm ourselves firmly with the revolutionary ideas of the great leader Comrade Kim Il Sung!” and ensured that the Juche idea was raised as the invariable guiding ideology of the WPK.

In the closing years of the last century, when a radical change took place in the political landscape and balance of power of the world in the wake of the collapse of several socialist countries, he administered Songun politics in a comprehensive way. This was an event of epoch-making importance in the development of socialist Korea.

In this process, the WPK developed into a powerful party which victoriously advances the socialist cause to realize the ideal of independence of the masses without the slightest vacillation in the face of upheavals of history.

Under the leadership of Kim Jong Il who turned Party work into work with people, the WPK advanced the historic cause for transforming nature, society and man as required by the Juche idea by placing the main stress on ideology in the revolution and construction and stimulating the enthusiasm of the masses.

The WPK was built into a genuine motherly party that formed an integral whole with the masses and serves them.

Regarding the forming an integral whole with the masses as an important principle in Party building and its activities, a matter of vital importance to the destiny of the Party, Kim Jong Il, in the whole course of leading the WPK, developed it into a mass party which represents and champions the demands and interests of the people, takes root deep among the broad sections of the masses and maintains the ties of kinship with them.

It is by no means accidental that the Korean people trust in and follow the WPK regarding it as their mother.

The DPRK celebrates June 19 in the same splendid way as it does October 10, the founding day of the WPK.