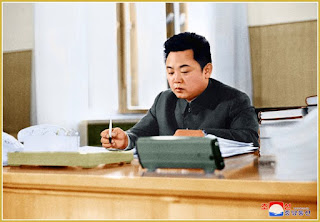 When comrade KIM JONG IL started work at the Central Committee, the issue of continuing the revolution and enhancing the leadership role of the party was very important . In the late 1950s and early 1960s , modern revisionism had appeared in some socialist countries and the international communist movement . This damaged the cause of the revolution in a number of ways . It split the international communist movement and the previously unified socialist camp . In a lot of countries communist parties split into two parties ( and in some places into even three or four or five parties ) . Worse still the prestige of many ruling and non ruling parties was severely damaged by Khruschov’s foolhardy and reckless speech attacking JV Stalin at the 20th Congress of the CPSU . The revisionists sought to deny and undermine the leading role of the Party and derail the building of socialism .

Comrade KIM JONG IL made sure that revisionism did not penetrate into the Workers Party of Korea and upheld the great Juche authored by the great leader President KIM IL SUNG . Comrade KIM JONG IL strived to establish the monolithic ideological system of Juche. He also brought about a new turn in the work of the WPK through his vigorous and untiring guidance of Party work . People came to talk about  the ever burning lamp at the Party centre which did not go out at night  because comrade KIM JONG IL worked through the night .

Through his guidance to Party work comrade KIM JONG IL ensured the leading role of the Party was not only maintained  but strengthened . The day after he started work at the Central Committee of the WPK , comrade KIM JONG IL wrote that ‘ Now is the time for us to hold the red flag higher . We should fight more staunchly to accomplish the cause of the leader ,holding aloft the red flag of the revolution , whatever difficulties and trials may confront the revolution ‘(KIM JONG IL Selected Works Vol 2 page 2) .

Comrade KIM JONG IL worked hard to strengthen the unity of the Party by firmly cementing the monolithic ideological system of Juche . Moreover he worked to not only strengthen the unity of the Party but the unity of society by uniting the masses firmly around the Party . He encouraged officials and cadres to go among the masses and resolutely opposed the bureaucratic and armchair style of work .As a result the WPK achieved the single-hearted unity of the leader, Party and people for the first time in history and turned the whole society into a large harmonious socialist family. As a result, the WPK was developed into a party which took root deep among the masses of the people, an invincible party enjoying absolute support and trust from the people.

Chairman , British Solidarity Committee for Peace and Reunification on the Korean Peninsula .