ASSPUK, BGSJI, UK KFA and BSCPRKP on the 19th anniversary of the murder of two south Korean schoolgirls by the US Army 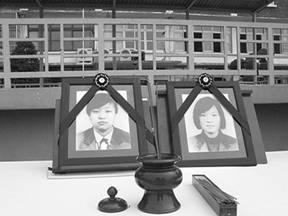 London 9th June Juche 110(2021)
The Association for the Study of Songun Politics UK(ASSPUK), the British Group for the Study of the Juche Idea (BGSJI) , UK Korean Friendship Association (UK KFA ) and the British Solidarity Committee for Peace and Reunification on the Korean Peninsula(BSCPRKP)issued the following joint statement today issued a joint statement on the 19th anniversary of the murder  of south Korean schoolgirls Sin Hyo Sun and Sim Mi Son by the US imperialist aggressor troops in south Korea;
On the 13th of June 2002,some 19 years ago two 13 year old school girls were run over by a US armoured vehicle and killed horribly. The US imperialist aggressor troops in south Korea are guilty of taking the lives of two innocent school children  who were walking home from school. Sin Hyo Sun and Sim Mi Son were just two innocent schoolgirls on their way home from school.
This atrocity by the US imperialists took Sin Hyo Sun and Sim Mi Son from their families and friends. Had they lived the two girls would now be in their 20s , starting out in life with hopes and aspirations. However life with  all its opportunities and challenges was taken from them by the US imperialists. No one was jailed for the crime. It was clearly a deliberate and premeditated act by the US imperialist troops who hate and despise the south Korean people.

Time for the US occupation army to get out of Korea. 30,000 troops should be returned to the USA, and re-deployed to more useful tasks.