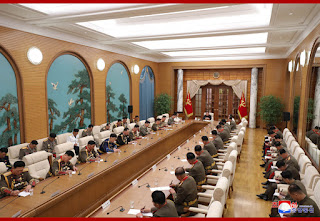 Pyongyang, June 12 (KCNA) -- The second enlarged meeting of the 8th Central Military Commission of the Workers' Party of Korea (WPK) took place at the office building of the Central Committee of the WPK on Friday.

Kim Jong Un, general secretary of the WPK and president of the State Affairs of the Democratic People's Republic of Korea, guided the meeting.

The enlarged meeting set forth important tasks for further enhancing the fighting efficiency of the revolutionary armed forces and bringing about a fresh turn in the overall work of national defence as required by the recent fast-changing situation around the Korean peninsula and the internal and external environment of our revolution and discussed the organizational issue.

At the meeting, the respected General Secretary analyzed the prevailing situation and the real state of the work of the People's Army and indicated the strategic tasks to be permanently held fast to by it and ways for developing the revolutionary armed forces.

The People's Army has to staunchly carry out the Party's line and policies on army building without an inch of deviation and keep a high alert posture to fulfill its noble mission and duty of firmly defending the sovereignty and security of the country and protecting the Party, revolutionary work, the interests of the state and people and the socialist construction, he stressed.

The meeting dealt with the organizational issue of dismissing, transferring and newly appointing some commanding officers of the services and those of some units at corps level. -0