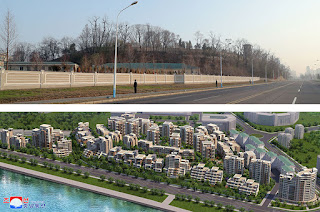 A residential district of terraced apartment houses for 800 households is under construction on a bank of the Pothong River in Pyongyang, the capital of the Democratic People’s Republic of Korea.

Observers and analysts are paying attention to the meaning of the construction of this residential district.

This project is not included in the construction of 10 000 flats in Pyongyang now under in full swing as well.

It should be an eye-opener for those who are looking for special news about the changes in the DPRK.

The site of the apartment houses is a hillock, an ideal place in Pyongyang. The natural scenery and surrounding environment would attract anyone who is engaged in real estate development.

Completion of this project would record another chapter of change in the history of the development of urban construction in Pyongyang.

Modern terraced apartment houses resembling those in the well-known cities of Switzerland and Italy will be set up in Pyongyang, too.

Pyongyang, recognized to have achieved a very high standard of architectural development by building modern streets including Mirae Scientists Street and Ryomyong Street, is planning to create another prototype of an environment-friendly and practical residential district by implementing this project.

It is interesting to note that Pyongyang is paying special attention to the detailed elements of urban and environment management in the course of this project.

An artist’s impression of the colony shows that the apartment houses and nature will be combined and the living and ecological spaces distributed in a scientific way so as to ensure an organic combination of work, relaxation, traffic and others. It also shows that the multi- and low-storey buildings on the hillock are going to be built to preserve the original ecological environment and sustain the specific features of different styles and profile elements.

Blue glass like that of the apartment houses in Mirae Scientists Street will be plastered on the exterior walls for the prevention and absorbing of sunshine in summer and in winter, respectively.

Also noteworthy is the fact that quality finishing materials are going to be used to decorate the exterior walls under the difficult conditions caused by the sanctions by the hostile forces and world health crisis.

The point is for whom this residential district resembling a colony of villas is being built. It is indeed a special district, and who are going to live there? Pyongyang has already made it clear that labour innovators and persons of meritorious service in all sectors, scientists, educators and writers would live in the terraced houses.

This fact would be something admirable for the international community. What would be unbelievable is the fact the houses would be provided to them free of charge. It has become institutionalized in the DPRK to supply houses to the people free of charge even though these houses were built at large state expense