ASSPUK, BGSJI , UK KFA and BSCPRKP on the 84th anniversary of the Battle of Pochonbo 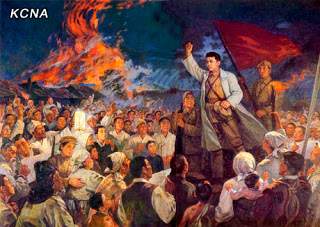 The Association for the Study of Songun Politics UK(ASSPUK), the British Group for the Study of the Juche Idea (BGSJI) , UK Korean Friendship Association (UK KFA ) and the British Solidarity Committee for Peace and Reunification on the Korean Peninsula(BSCPRKP)issued the following joint statement on the occasion of the the 84th anniversary of the battle of Pochonbo .

The battle of Pochonbo was a unique military  and political feat of the Korean People's Revolutionary Army under the command of the great leader comrade Kim Il Sung , a gifted military strategist, heroic partisan leader and ever-victorious iron-willed brilliant commander. The battle of Pochonbo struck a mighty blow against the fascistic Japanese imperialists ,striking fear into them.
It was on the 4th of June 1937 that the revolutionary fighters of the KPRA carried out a daring and audacious operation to advance into the Korean homeland , under the command of the great leader comrade Kim Il Sung. General Kim Il Sung the commander of the KPRA had put forward the bold  policy of advancing into the Korean homeland and to strike at the Japanese imperialist occupiers.
The Japanese imperialists who had annexed Korea in 1910 were severely oppressing the Korean people ,literally strangling the life out of them and trying to obliterate everything Korean. The question of advance into the homeland was simply not a military one but a political and ideological one .
Under the wise command of the great leader comrade Kim Il Sung using  brilliant Juche-orientated guerrilla tactics the Korean People's Revolutionary Army annihilated the Japanese imperialist aggressors in Pochonbo and went on to defeat them in the battles of Kouyushan and Jiansanfeng,
As the great leader comrade Kim Il Sung said
" Brothers and sisters, look at the flames over there. Those raging flames show that the enemy is doomed. Those flames show the whole world that our nation is not dead but alive, and that if we fight against the Japanese imperialist plunderers we can win. Those flames will shine like a ray of hope in the hearts of our people suffering from maltreatment and hunger, and will spread throughout our three-thousand-r/ land like a torch of struggle.
The Korean people are not of the “same descent” as the Japanese imperialist villains, and we do not acknowledge the idea noisily propagandized by them that “Japan and Korea are one”.
We, the KPRA, will tighten our grip on our weapons of revenge and liberate our 23 million fellow countrymen suffering from hunger and poverty, ignorance and darkness. We will liberate our fatherland come what may, and establish a people’s country free from oppression and exploitation on the land of the independent fatherland."
Indeed the flames of Pochonbo symbolised the cleansing of Japanese imperialism from Korea and the destruction of the old society of exploitation and oppression.
The victory in the Pochonbo battle, which was due to the protean guerrilla tactic of the great leader comrade Kim Il Sung, was a powerful inspiration to the oppressed peoples of the world in their anti-imperialist ,anti-colonialist struggle . As one third world liberation fighter wrote " The beacon fire of Pochonbo marked a great event which gave confidence in struggle to not only the Korean people under the colonial rule of Japanese imperialism , but also to the world revolutionary oppressed people, groaning in those days under the heels of the imperialist aggressors -fascist Germany, Italy , Japanese imperialism and American and British imperialism "

Today the battle of Pochonbo remains a potent  inspiration and model of success in guerrilla struggle for anti-imperialist independence movements. The beacon fire of independence lit in Pochonbo 84 years ago still burns brightly in the independent  ,self reliant DPRK the land of Juche .
ASSPUK
BGSJI
UK KFA
BSCPRKP