ASSPUK, BGSJI, UK KFA and BSCPRKP on the 2nd anniversary of the September 18th inter-Korean summit and joint declaration 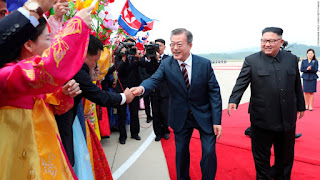 The Association For the Study of Songun Politics UK (ASSPUK) , the British Group for the Study of the Juche Idea, the UK Korean Friendship Association (UK KFA )  ,and the British Solidarity Committee for Peace and Reunification in Korea (BSCPRKP) issued a joint statement on the occasion of the 2nd anniversary of the September 18th 2018 inter-Korean summit and joint declaration:

Two years  ago on the 18th of September 2018 the supreme leader respected Marshal KIM JONG UN  held the 5th inter-Korean summit with the south Korean chief executive Moon Jae In in Pyongyang . The summit saw many deeply emotional and stirring events such as the visit of Moon Jae In to the sacred mountain of Mt Paektu.

However the Korean people have not been able to travel far on the road of peaceful reunification because the south Korean side has failed to implement their side of the agreements . Moreover they allowed profoundly hostile actions towards the DPRK to take place as well as carrying out military exercises targeting the DPRK . This is truly shameful .

Our organisations urge south Korea to abide by the terms agreed to  in the September Joint Declaration.

Forward to peace ,prosperity and reunification !