On the 70th anniversary of the foundation of KIM IL SUNG University -ASSPUK, JISGE , UK KFA and UK Korean Friendship Association(UK KFA) and the UK Preparatory Committee For the 2017 Gathering to Praise the Great Persons Born of Mt Paektu 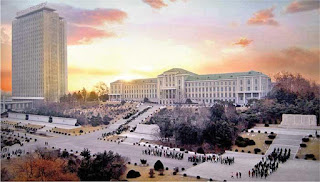 30th September Juche 105(2016)
The Association For the Study of Songun Politics UK(ASSPUK),the Juche Idea Study Group of England(JISGE),the UK Korean Friendship Association(UK KFA) and the UK Preparatory Committee For the 2017 Gathering to Praise the Great Persons Born of Mt Paektu issued a joint statement on the 70th anniversary  of the foundation of KIM IL SUNG university:
70 years ago on the 1st of October 1946 , KIM IL SUNG university was founded .This was the first people's university in Korea , a new type of university which would serve the interests of the working people and contribute greatly to the building of a new socialist state in Korea. It was. and is, totally different to the so-called "seats of higher learning "in the capitalist countries which only cater for the children of the bourgeoisie and the rich and privileged sections of society. Such capitalist universities only teach the most reactionary and backward anti-popular ideology and social science whereas KIM IL SUNG University teaches the advanced social science of Juche and Songun.Indeed KIM IL SUNG University is the palace of Juche-orientated social science and the acme of revolutionary education and learning in People's Korea.
KIM IL SUNG University is associated with the leadership feats of the great leader President KIM IL SUNG.He set up the university with the patriotic rice donation of the peasant Kim Je Won.KIM IL SUNG university was the first institution of higher learning in the new People's Korea which had previously not had any university or institute of higher learning.
The University is also closely associated with the revolutionary activities of the great leader comrade KIM JONG IL who studied at the university for 4 years.It was here that comrade KIM JONG IL made his pledge to glorify Korea .Standing on the Ryongnam Hill he said

"As I stand on Ryongnam Hill at sunrise,
The land of 3,000 ri greets my eyes.
Learning the leader's great idea,
I will be the master of the revolution in this land, Korea.
0 Korea, I will add glory to thee.
-
On the road of Juche I will be firm and steady
Under the guidance of the great leader.
Braving the raging waves and storms,
I will lead Korea into the future.
O Korea, I will make thee famous.

I will go on for ever with the cause of the sun
That shines over the whole world.
I will bring about the era of communism
When the red glow of Juche will cover the earth.
O Korea, my Korea!
It was here at the KIM IL SUNG University that the great leader comrade KIM JONG IL wrote many important works such as The Characteristics of Modern imperialism and Its Aggressive Nature andThe Place and Role of the County in the Building of Socialism.
Today KIM IL SUNG University is the premier university of the DPRK. It is a truly world class university it has many faculties and departments and the latest equipment .Visiting the University in 2012 and 2015 delegations of the ASSPUK, JISGE and UK KFA were most impressed.The University has an e-library and also a modern swimming pool and gymnasium.It is far superior to any university in a capitalist country.Moreover the education is given free of charge. We understand that there are plans to expand the university even further .
On the occasion of the 70th anniversary of its foundation we wish the teachers,staff and students of KIM IL SUNG University every success in their responsible work.
ASSPUK
JISGE
UK KFAUK Korean Friendship Association(UK KFA) and the UK Preparatory Committee For the 2017 Gathering to Praise the Great Persons Born of Mt Paektu