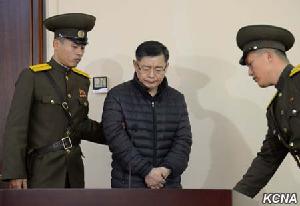 Pyongyang, December 16 (KCNA) -- The Supreme Court of the DPRK on Wednesday held a trial on Rim Hyon Su, a Canada-resident Korean reverend who had committed the state subversive plots and activities against the DPRK, pursuant to the state-sponsored political terrorism and anti-DPRK hostile policy of the U.S. and south Korean authorities.
The justice examined the case of Rim Hyon Su, accused of violation of Article 60 of the DPRK Criminal Code. A written indictment verifying his crimes was submitted before an inquiry into the facts of the case.
In the course of the inquiry, the accused confessed to all heinous crimes he had committed by resorting to subversive plots and activities against the DPRK.
He malignantly hurt the dignity of the supreme leadership and social system of the DPRK out of inveterate repugnancy toward it, committed anti-DPRK religious activities, conducted false propaganda among overseas Koreans and took active part in the operation of the U.S. and the south Korean conservative group to lure and abduct DPRK citizens and in their programs for "aiding defectors from the north".
The court condemned Rim Hyon Su to a penalty of indefinite compulsory labor. -0-
Posted by juche007 at 03:37