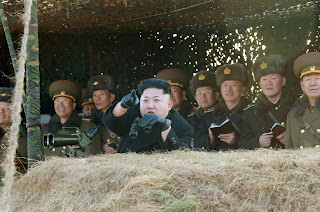 In August this year (2015)  a very tense situation had arisen when the south Korea puppets created a tense situation by groundlessly blaming the DPRK for an incident in the De Militarised Zone and threatening to resume pyschological warfare broadcasts . Dear respected Marhsal KIM JONG UN gave the order to the Korean People's Army to stand ready to go into action in the front-line areas and destroy the broadcasting means . The south Korean puppets backed down and turned off the loudspeakers . This was a great victory demonstrating the brilliant commanding art, daring and iron will of dear respected Marshal KIM JONG UN.
The self-defence potenials of the DPRK have grown considerably under the guidance of dear
respected  Marshal KIM JONG UN . The DPRK now has submarine launched ballistic missiles and  a hydrogen bomb.

As a result of the assumption of the position of Supreme commander of the Korean People's Army by the dear respected leader Marshal KIM JONG UN the continuity of the Songun revolutionary leadership has been  maintained. The  KPA has been built up as an even more powerful revolutionary armed force. Dear respected Marshal KIM JONG UN is following in the footsteps of the great generalissimo’s of Mt Paektu KIM IL SUNG and KIM JONG IL ,  he is an iron-willed brilliant commander of Songun ready to wipe out the US imperialists, the sworn enemy of Korean people and their south Korea puppets at one go and reunify the country.
ASSPUK and JISGE extend our warm congratulations to dear respected Marshal KIM JONG UN on the 4th anniversary of his appointment as Supreme Commander of the Korean People's Army.
ASSPUK
JISGE
Posted by juche007 at 09:15