Why the DPRK was right to sever relations with Malaysia . 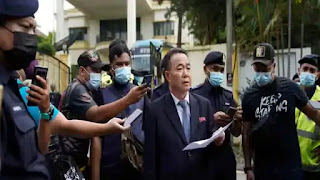 On the 19th of March , the Foreign Ministry of the Democratic People’s Republic of Korea issued a statement  titled ‘Unfairness Would Not Escape from Stern Judgment of Fairness: DPRK Ministry of Foreign Affairs  in which the DPRK announced that it sever diplomatic relations with Malaysia because of its ‘ super-large hostile act against the DPRK in subservience to the U.S. pressure.’  By Sunday 21st of March , DPRK diplomats left Malaysia and the DPRK embassy was closed down . DPRK Charge D Affaires  Kim Yu Song read out a statement as he and other diplomats left the Embassy saying that Malaysia had  ‘“committed an unpardonable crime" and was part of a US led conspiracy against the DPRK .

This is the first time since the 1970s that the DPRK has severed diplomatic relations with another country .The DPRK’s foreign policy is based on the concepts of independence , peace and friendship .It has always worked with those countries that are friendly to it and respect its sovereignty even if there are differences in system  and in policies . The DPRK does not try to impose its system on others or interfere in other countries.

Prior to the DPRK’s statement severing relations   , Malaysia  had , on the 17th of March, extradited a DPRK citizen , Mr Mun Chol Myong , to the United States on false charges . Mr Mun had been held in detention in Malaysia for 670 days before he was extradited to the US . Malaysia  produced no actual evidence against him , only a string of false allegations from the US .

It is a truly despicable and vile act by the Malaysian regime as Mr Mun will not receive a fair trial in the US and worse still because the DPRK and US are technically at war  , he could be treated as an enemy combatant and even executed .

Before Mr Mun’s extradition to the US , the US organised a drinking party for Malaysian officials and they were promised a free weapons delivery by the US.

Malaysia is in fact a neo-colony and a puppet of the US .It is ruled by a corrupt comprador bourgeoisie .

. Malaysia signed agreements on intelligence and counter-terrorism with the US  . In 2014 Malaysia  joined the so-called Profileration Security Initative , a US led effort directed at the DPRK and others.. Malaysia has agreed to having US bases on its soil. The US is the biggest investor in Malaysia. Malaysia is a member of US imperialist controlled bodies such as the IMF, World Bank, APEC and TPP. The US state department website says of Malaysia " Today, Malaysia is a significant regional and global partner for the United States, and the two countries share a diverse and expanding partnership in trade, investment, security, environmental cooperation, and educational and cultural relations."

Malaysia also has a cosy relations with the south Korean puppets.The Malaysian Prime Minister visited south Korea in 2014 and met south Korean  puppet boss lady Park Geun Hye. Malaysia signed many business deals with the south.In the past Malaysia was regarded by some on the Left  as a fascist comprador neo-colony because it heavily repressed the Malaysian Communist Party and fought a bitter civil war against the communists  with the backing of  US imperialism and British imperialism.

Communist parties are still illegal in Malaysia and it is highly likely that extreme anti-communist ideology permeates the minds of those in authority in Malaysia. Therefore  is not so surprising that Malaysia is playing a big role in anti DPRK provocations and conspiracies . Shame on Malaysia , the modern day running dogs of imperialism !

Down with the Malaysian fascist puppets  !

Chairman British Solidarity Committee for Peace and Reunification on the Korean Peninsula .

https://juche007-anglo-peopleskoreafriendship.blogspot.com/2017/03/on-kuala-lumpur-conspiracy-against.html
Posted by juche007 at 06:36