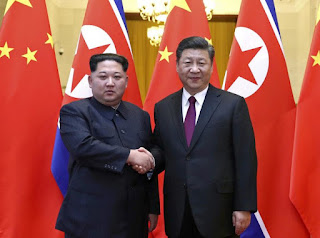 Pyongyang, March 23 (KCNA) -- Kim Jong Un, general secretary of the Workers' Party of Korea (WPK) and president of the State Affairs of the Democratic People's Republic of Korea, sent a verbal message to Xi Jinping, general secretary of the Central Committee of the Communist Party of China (CPC) and president of the People's Republic of China, to notify the accounts of the 8th Congress of the WPK, as required by the times that call for intensifying the strategic communication between the two parties on the basis of deep comradeship.

The respected Comrade Kim Jong Un in the message noted in detail that the 8th Congress of the WPK set forth scientific and realistic struggle lines and strategic and tactical tasks for achieving a fresh innovation in the Party and state affairs, as required by the changed internal and external situations and reality.

The message said that the congress took practical measures to strengthen the leadership and fighting efficiency of the Party, bring about its sound development and consolidate the state and social system, and fixed the direction of the advance and struggle policies of the Korean revolution, including discussion of and decision on the economic strategy and a new long-term plan in the current stage.

Informing in detail that the WPK discussed and decided on its policy stand on the bolstering of defence capabilities of the country, the inter-Korean relations and the DPRK-U.S. relations after an in-depth study and analysis of the situations of the Korean peninsula and the international relations, it stressed the need to strengthen the unity and cooperation between the two parties and two countries to cope with the hostile forces' all-round challenges and obstructive moves.

Kim Jong Un in the message said that he rejoices, as over his own, over the remarkable successes made by the CPC and the Chinese people in the struggle for building a comprehensively well-off society under the leadership of General Secretary Xi Jinping, successfully tackling the terrible disaster caused by the world health crisis and firmly defending socialism in the face of vicious slander and pressure by the hostile forces.

Stressing that it is the steadfast will of the WPK and the Korean people to vigorously advance the cause of socialism by dint of friendship and unity, the message expressed belief that the cooperation between the two parties would continue to go well and the friendly relations between the two countries would grow stronger, as required by the times and in conformity with the desires, wishes and core interests of the two peoples this significant year, too, which marks the 100th founding anniversary of the CPC and the 60th anniversary of the conclusion of the DPRK-China Treaty of Friendship, Cooperation and Mutual Assistance.

It sincerely wished Xi Jinping good health and bigger success in performing his heavy duty of leading the CPC and the Chinese people. -0-