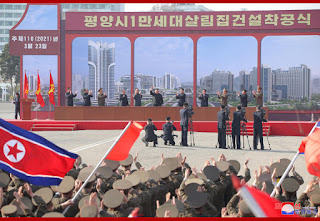 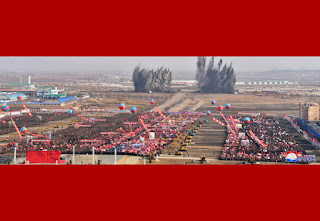 Pyongyang, March 24 (KCNA) -- 50 000 modern flats will be built in Pyongyang in reflection of our Party's noble ideal of "The People Are God" and its idea of the Juche-oriented architectural beauty during the period of the new five-year plan, according to the grand plan of capital city construction unfolded at the 8th Congress of the Workers' Party of Korea (WPK).

The large-scale construction of the flats in Pyongyang to be built as new ideal streets for the people demonstrating the national power and socialist civilization is the top priority task for our Party and the government. In particular, to provide the citizens of the capital with 10 000 flats this year is a gigantic struggle for creation to thoroughly implement the decisions made at the 2nd Plenary Meeting of the 8th Central Committee of the WPK.

A ground-breaking ceremony for building 10 000 flats in Pyongyang took place in the Songsin and Songhwa areas of Sadong District on Mar. 23.

The venue of the ground-breaking ceremony for the great construction which will witness another significant landmark in the history of the construction of the capital were full of high revolutionary enthusiasm of army- and people-builders to create new construction myth by dint of the great army-people unity in the worthwhile struggle to bring into a bright reality the noble intention of the Party Central Committee, and a great number of red flags, slogans and watchwords were seen there.

Kim Jong Un, general secretary of the Workers' Party of Korea and president of the State Affairs of the Democratic People's Republic of Korea, arrived at the venue of the ground-breaking ceremony.

The moment, all the participants raised stormy cheers of "Hurrah!" in honor of him who has made all the Party and state affairs consistent with absolute and unconditional service for the people and made tireless efforts with his devoted service for the people's wellbeing to ceaselessly create a sacred history of the people-first principle on the motherland.

Kwon Yong Jin and Kim Jong Gwan and other officials of the armed forces organs were also present.

The respected Comrade Kim Jong Un made an enthusiastic speech full of warm loving care for the people and deep trust in the builders.

He said that building 50 000 flats in Pyongyang is something our Party has long intended, made preparations for and aspired to do in order to provide the citizens of the capital city with more cultured and stable living conditions, and an ennobling undertaking to turn the assets of the state and fruits of creative labour of the working masses thoroughly into their benefits.

He stressed that the construction of 10 000 flats this year is the project of a massive scale, but our Party decided to push ahead with the project unconditionally as it is directly related with the living of the citizens of the capital city and as it is an important political undertaking of the first year of implementing the decisions of the Party Congress to the letter.

He added that the potential of our state and the creative strength of our people will be displayed to the full once again in this course.

He expressed the conviction that today, when we are advancing to achieve prosperity and development upholding our state-first principle, this project will constitute a major thrust area symbolic of the era of a fresh upsurge and massive transformation in socialist construction and that we will usher in an era of fresh dynamic advance which will develop socialist construction by stage with confidence.

He noted that the grand construction of today will be of monumental significance in the history of building the capital city.

He was convinced that the People's Army the Party Central Committee believes first will give full play to its militant temperament in this creative struggle of construction, too, and all the builders will achieve a sure victory with their creative enthusiasm, endeavour, and ardent patriotic spirit.

He then set forth tasks arising in the construction.

Nothing is more worthwhile and honourable and happier than to unhesitatingly dedicate our sweat and passion to building an ideal street which will be a dear cradle for nobody else but our people who are the best and greatest in the world, he said, and ardently appealed to fight vigorously for the future of our capital which will become more beautiful and magnificent, for our parents, brothers, sisters, sons and daughters who will create and enjoy there a new civilization to their heart's content, and for the brilliant implementation of the decisions of the Eighth Party Congress.

When he concluded his speech, all the participants broke into enthusiastic cheers and loud shouts for devotedly implementing the Party's policies, hardly repressing their emotions.

He personally awarded the leading officials the flag of the headquarters of the construction of 50 000 flats in Pyongyang.

KPA Vice Marshal Kim Jong Gwan, minister of National Defence, made a pledge speech on behalf of the builders.

He expressed the firm will of builders to create a new Pyongyang speed and perform new building miracles by becoming standard-bearers of charge and construction heroes in the ongoing struggle for bringing about a turning point of a new victory in the history of socialist construction, under the uplifted flag of the headquarters awarded by the respected General Secretary as the colors of the revolution.

All the builders solemnly vowed before the Party and the people to enshrine the great loving care and trust shown by the General Secretary and become the first advancing group and the first vanguard who carry out the grandiose struggle programme advanced at the Party Congress in the van by building 10 000 flats in Pyongyang City at the highest level each year till 2025 which will mark the 80th founding anniversary of the Party by giving full play to the indomitable charging spirit and matchless spirit of breaking through hardships.

There was a blasting, signaling the ground-breaking for building 10 000 flats in Pyongyang City.

Following the blast that shook the earth in March vibrant with life, a number of excavators started working all at once amid the high spirit of all the builders in the vast construction site.

Kim Jong Un warmly encouraged the builders who advanced into the responsible and honorable construction drive for living up to the promise which our Party made with the people in the name of the dignified Party Congress.

The construction of 10 000 flats in Pyongyang City will further stir up the fighting stamina of all the people across the country who are all out in the campaign for implementing the decisions made at the 8th Congress of the Party, while clearly demonstrating the brave spirit of our own-style socialism making a dynamic advance and leap forward toward the fresh victory of the revolution, true to our Party's ideals of "The people are God", single-minded unity and self-reliance. -0-