The DPRK Seen through Women’s Rights 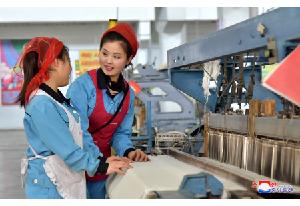 The definition and realization of women’s social position and rights depend on the type of society they live in. The women’s rights issue can show the true nature of a society.

Then, how are they ensured in the Democratic People’s Republic of Korea?

First, women’s dignity and personality are guaranteed by law in the country.

It has taken legislative and practical measures so that women can possess and exercise equal rights with men in all fields of the state and social life. More than seventy years ago, the Law on Sex Equality was adopted to ensure women’s equality and political rights. The Socialist Constitution, the law on providing women’s rights, socialist labour law and others guarantee their rights in the political, economic, cultural and all other fields. Women’s dignity and personality are respected thanks to the state and social policies, and this has become a universal climate and virtue of the society.

Second, they freely take part in the state and social activities as legitimate masters of the country, making proactive contributions to social development.

They are eligible for deputyship to the Supreme People’s Assembly and fully exercise their political rights in the ruling Workers’ Party of Korea, working people’s organizations and other political organizations. Not a few of them hold responsible positions in their respective organs. Women are playing active and prominent roles in the fields of science, education, public health, arts and sports. What should be mentioned in particular is the fact that they exercise all their rights as equal and free members of society regardless of social position, stratum and property status. They are free from unemployment, human trafficking, domestic violence and all other fetters and forms of inequality.

Third, they enjoy special benefits from the state.

The nurseries, kindergartens and public amenities set up in residential quarters, factories, enterprises and cooperative farms make it possible for them to take part in production and social activities feeling no inconvenience. There are hospitals dedicated to women such as the Breast Tumour Institute of the Pyongyang Maternity Hospital, and it is the government policy to diagnose early and treat the women’s diseases. It is not uncommon that the state sends even an airplane and takes all necessary measures for a woman and her premature baby. The country encourages women to have many children; it assigns doctors to the women who gave birth to triplets or quadruplets and provides them with houses on a preferential basis. There are many other special benefits for them. And those with many children are awarded with the title of “Mother Hero.

An Irish woman said: If I can be born again, I want to be born a Korean woman; the DPRK is a real heaven for women, in which their genuine rights and dignity are ensured at the highest level.