Anti-US rally outside US Garrison

Anti-US rally outside US Garrison

Days ago, the Seoul Progressive Federation of University Students had a news conference in demand of withdrawal of the US forces present in south Korea outside the Yongsan Garrison.

Referring to the fact that serious contamination of the Yongsan Garrison, it reprimanded the US army which has evaded the responsibility for environmental pollution, hosted a dance party without wearing face coverings, and committed indescribable sexual assault and murder. There is no ground for the US forces to be stationed in south Korea and they should leave south Korea after atoning for their crimes. We will carry on uninterrupted action until the US forces in south Korea be withdrawn from south Korea, it stressed. 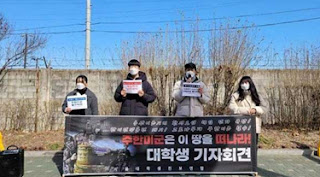