Why Does the West Deny the Reality of the DPRK? 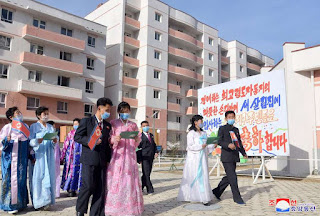 Every citizen in the DPRK has a right to elect and to be elected. Workers, farmers and intellectuals can be elected deputies to people’s assemblies at all levels including the Supreme People’s Assembly (Parliament in the Western countries), and participate directly in the state administration. In the West, however, the right to elect and to be elected is granted according to the duration of residence and property status. It is rare that workers and peasants are elected to the Parliament or local councils.

Unemployment always exists in any Western country no matter how developed it may be, but there is no word unemployment in the DPRK. The state provides all citizens of working age with suitable jobs according to their wishes and aptitudes.

There are no homeless people in the country. The state provides houses to the working people free of charge. Ordinary workers and office employees live in the excellent apartment houses in Mirae Scientists and Ryomyong streets in Pyongyang, which are admired by many people in the world. When flooding hit the country last year, the state built new houses for the flood victims through an all-out drive. The newly-built houses numbered over 20 000.

The Korean people are not concerned about nursing, education and medical treatment. The state bears the whole burden of looking after and bringing up children. University and extracurricular educations, to say nothing of primary and secondary educations, are free. The state enforces universal 12-year compulsory education, which is a high level in the world. Ri (dong), which is the lowest administrative unit in the country, has a hospital or clinic, and residents have doctors assigned to them. Anyone receives free medical care.

Such facts, if known to the international community, will be nothing but the biggest trouble for those who are trying to isolate and stifle the DPRK. That is why the West is so enthusiastic about tarnishing the image of the DPRK.