ASSPUK, BGSJI, UK KFA and BSCPRKP on 47th anniversary of the abolition of taxation in the DPRK.

London 15h March  Juche 110(2021)
The Association for the Study of Songun Politics UK,the British Group for the Study of the Juche Idea Study ,the UK Korean Friendship Association and the British Solidarity Committee for Peace and Reunification on the Korean Peninsula(BSCPRKP) today issued a statement on the 47th anniversary of the complete abolition of taxation in the Democratic People's Republic of Korea:
47 years ago the Supreme People's Assembly of the DPRK on the 21st of March 1974 passed the law on the Complete Abolition of Taxation  thus the DPRK became the first state in the world without taxation , a truly remarkable feat. Since that day the people of the DPRK have been free from income tax and local taxation but at the same time have enjoyed free health care , free education and low cost housing . Today young and middle aged Korean people do not understand the meaning of the word "tax"  !
After the liberation of Korea from Japan  on August 15 1945) the predatory  tax system of the Japanese imperialists was abolished and a popular and democratic tax system was established in the DPRK, thus putting an end to over 50 kinds of miscellaneous taxes and turning the taxation into a single one.
In 1955 the government of People's Korea  again cut the income tax of the workers and office employees by 30 percent, sharply reduced the tax burden of the handicraft workers, entrepreneurs and merchants and decreased the agricultural tax in kind from 25 percent of the grain output to 20.1 percent on an average. From 1959 it reduced the agricultural tax in kind to 8.4 percent.
The agricultural tax in kind, which had been instituted right after the liberation, was eliminated in the period from 1964 to 1966 for good in accordance with "Theses on the Socialist Rural Question in Our Country" authored by President Kim Il Sung.
As a result there remained in the country only the income tax of the working people and the negligible local autonomy tax. The tax paid by the population amounted to two percent or less in the revenue of the state budget.   Thus abolishing taxation became the order of the day . As the great leader comrade Kim Il Sung said
" To abolish the tax system is a revolution to free the working people from these vestiges and a great change to meet the centuries-old desire of the people.


The system of taxation which came into being with the emergence of the state, has been used in a class society for thousands of years as a means of preserving the ruling machine of the governing classes and plundering the working people."
Taxation  for centuries had been a great burden for the working people with people cursing taxation . There is an old saying that in there only only two certainties -death and taxes . In the capitalist countries  today taxation is a very big problem .  In recent years under austerity polices taxation has increased in several capitalist countries but at the same time public services have been cut . Many workers in the UK have to pay a big percentage of their pay in tax and national insurance , on top of that there is 20% VAT  and council tax which rob people of their money . Even those who own their properties are hit by "service charges ". 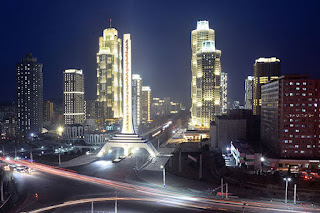 Abolishing taxation in the DPRK was a master stroke which improved people's living standards . At the same time thanks to increasing socialist production  in the DPRK public spending has increased many times over. This is a miracle .It is amazing that People's Korea has had 47 years without taxation.
The DPRK is a real paradise for the working people thanks to the Juche idea , the advanced socialist system and the people centred policies of great generalissimo's Kim Il Sung and Kim Jong Il which are today carried forward by dear respected Marshal Kim Jong Un under the banner of self-reliance .The abolition of taxation in the DPRK is a great inspiration to the working people of Britain in their struggle against austerity , exploitation and oppression.
ASSPUK
BGSJI
UK KFA
BSCPRKP
Posted by juche007 at 06:59