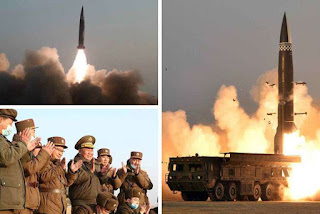 The test was guided by Ri Pyong Chol, member of the Presidium of the Political Bureau and secretary of the Central Committee of the Workers' Party of Korea, officials of the Department of Munitions Industry of the Party Central Committee and leading officials in the sector of national defence scientific research.

The two testfired new-type tactical guided missiles accurately hit the target set in the waters 600 kilometers off the east coast of Korea.

Right after the test-firing, the Academy of Defence Science clarified that the test-firing was very successful just as it had been confidently predicted, adding that the reliability of the improved version of solid fuel engine was confirmed through several engine ground jet tests and their test-firing processes, and that the irregular orbit features of low-altitude gliding leap type flight mode already applied to other guided missile were also re-confirmed.

Ri Pyong Chol said that the test-firing is an important process in implementing the policy of national defence science set forth at the 8th Congress of the WPK and that the development of this weapon system is of great significance in bolstering up the military power of the country and deterring all sorts of military threats existing on the Korean Peninsula.

He immediately reported the successful result of the test-firing to the General Secretary of the WPK and conveyed the congratulations of the Party Central Committee to the sector of national defence scientific research. -0-