ASSPUK, JISGE and UK KFA commentary on the succesful launch of submarine ballistic missile by the DPRK 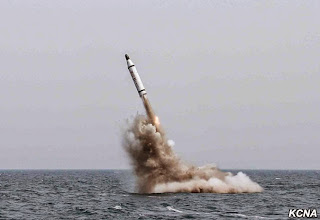 London 10th of May Juche 104(2015)
The DPRK's launch of a ballistic missile from a submarine under the leadership of dear respected Marshal KIM JONG UN  is an amazing achievement . . Well done DPRK , well done supreme leader Marshal KIM JONG UN !  South Korea does not have submarines that can launch a missile , so the DPRK now has the edge over south Korea and it is on a level equal to the United States and other big powers. The DPRK can now take out US bases in the Pacific region without any difficulty .
A hundred years ago Korea did not appear on the world as it was a colony of Japan. Korea could not even make the most basic rifles but by thanks to self-reliance, Juche and Songun the DPRK can make nuclear weapons and submarines that fire missiles !
ASSPUK
JISGE
UK KFA