Workers Party of Korea Ever-Victorious Under the Banner of Juche and Self-Reliance . -special article by Dr Dermot Hudson 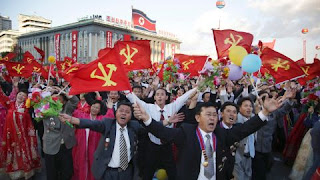 In a few days time the great Workers Party of Korea(WPK)  will celebrate the 76th anniversary of its foundation by the great leader comrade KIM IL SUNG . The WPK will be celebrating its 76th anniversary at a time when the world is convulsed by the global health crisis as well as emerging crises in energy ,food and rising prices . Moreover the WPK is celebrating its 76th anniversary proudly when other ruling parties of the former socialist camp no longer exist .The former Communist Party of the Soviet Union (CPSU ) once looked up to millions of people throughout the world and seen by them as a great and mighty party , a role model , was dissolved or declared illegal on the 6th of November 1991 nearly 30 years ago . The Socialist Unity Party of Germany  which had been the ruling party of the former German Democratic Republic , was dissolved in December 1989 . Some communist and workers parties changed their nature . Some non ruling parties became social democratic parties or just disappeared .

However , the Workers Party of Korea led by respected Marshal KIM JONG UN will celebrate its 76th anniversary after successfully holding its 8th Congress in January this year  and last year celebrated the 75th anniversary of its foundation . Both these events were marked by massive military and civilian parades .  What is the secret of the success of the WPK  ? Well it can be found in the excellent leadership of its founder President KIM IL SUNG , Chairman KIM JONG IL and Marshal KIM JONG UN  who were the helmsman steering the WPK through the great storms of history such the fraught period in the 1960s when differences arose in the international communist movement and socialist camp  and the early 1990s when the foul wind of anti-socialism instigated by imperialism and modern revisionism swept across the world toppling many socialist countries . They also lead the WPK through periods when the DPRK and Korean people faced immense challenges such as sanctions and natural disasters and more recently the global health crisis .

The secret can also be found in the great Juche Idea that was first authored by the great leader President KIM IL SUNG and developed and systematised by the great leader comrade KIM JONG IL . The Juche idea stipulates that the popular masses are the masters of the revolution and construction  and that independence must be maintained in all activities .

The WPK was founded not from top down but from the grassroots . The foundation stone of the WPK was the Down With Imperialism Union founded in 1926 by the great leader President KIM IL SUNG and based among the revolutionary youth and students of the new generation .  The WPK roots are in the Anti-Japanese armed struggle . The foundation of the WPK was a process rather than a single act . Its foundation was quite different to other communist parties which were founded as a result of a revolutionary faction seceding from a reformist party or the merger of different communist groups within a given country  .

The WPK guided by the Juche idea was always based upon the masses and had a genuine mass foundation . The symbol of the WPK is a hammer , sickle and Korean writing brush . The writing brush represents the working intellectuals and of course the hammer represents industrial workers and the sickle farmers . This made the WPK unique among communist and workers parties in the world.

Guided by Juche , the WPK has always been totally independent  . This meant it avoided Right and Left deviations  which other ruling communist parties suffered from causing the derailment of socialist construction in those countries . The WPK inspired by Juche and under the leadership of comrades KIM IL SUNG , KIM JONG IL and KIM JONG UN built Juche socialism , a true socialist parade and a most durable and invincible socialism .

The Workers Party of Korea will march on to final victory under the banner of Juche and self-reliance .