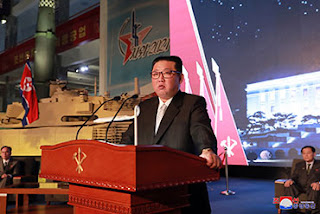 The Association For the Study of Songun Politics UK (ASSPUK) , the British Group for the Study of the Juche Idea(BGSJI), the UK Korean Friendship Association (UK KFA )  ,and the British Solidarity Committee for Peace and Reunification in Korea (BSCPRKP) issued a joint statement  in support of the commemorative speech made by respeced Marshal KIM JONG UN at the opening of the Defence Development Exhibition "Self-Defence-2021:

In the speech Marshal KIM JONG UN pays tribute to the DPRK's defence industry and expresses gratitude to the scientists , technicians and workers of the DPRK 's defence industry . In the past five years despite  all sorts of difficulties , obasctles and trials the defence industry of the DPRK has developed by leaps and bounds . This in itself proves the invinciblity of the idea of self-reliance , self-defence and the Juche Idea and Songun idea .  As Marshal KIM JONG UN says ' We should not be inadvertent in seeing the military hardware displayed in fine array here, which we have managed to develop over the past five years.

The DPRK's self-defensive capaablities are a manifestation of the strength of the DPRK based on Juche and self -defence .

Moreover respected Marshal KIM JONG UN points out that the DPRK 's military capacity is absolutely vital for defending the independence of the country and avoid the repetiion of the past history when Korea was invaded and colonised .  As Marshal KIM JONG UN says ' Historically, our nation suffered trials owing to invasion by foreign forces and has had to build socialism under the constant threats by hostile forces from one century into the next.

In view of this lesson of the history of the nation and the demand and special character of the Korean revolution, building up national defence is an indispensable and vital state affair which our Party, government and people must not neglect even a moment."

These words ring true , they represent an absolute truth in fact . The importance of building up self-defensive capablities in a socialist state can never be slighted  or downplayed or neglected.

Referring to the so-called peace intitatives of the US under the Biden adminstration , Marshal KIM JONG UN gives a most incisive analysis which sees through the fake peace of the US imperialists pointing out that ''Recently, the United States has frequently sent signals that it is not hostile to our state, but its behaviours provide us with no reason why we should believe in them.

Sure enough, it is not fools alone that live in the world. I wonder if there is any person or state who believes in its claim that it is not hostile to the DPRK and, if any, I am curious to know who they are?".

This effectively demolishes the fake peace rhetoric of the US Biden regime which is trying to fool people .

Respected Marshal KIM JONG UN concludes by saying that the Korean people should not rest on their laurels but continue to build up the self-defence capablity of the nation saying that "without strong self-defence capability we can neither expect successful progress of the internal and external policies of the Party and the government nor think about stability and peaceful environment of the country.

All the people, too, should support the consistent and iron will of our Party and government by regarding it as the highest expression of patriotism to strengthen the defence capability and rendering unsparing material and spiritual assistance to it.

We must be powerful also for our coming generations. This is our first and foremost task"

This shows that the DPRK has no illusions and believes in its own strength .

All in all this is a brilliant speech by Marshal KIM JONG UN which contains powerful ideas  for building up national defence and is an expression of the idea of self-reliance in national defence which is a guiding principle of the Juche Idea . We recommend a deep study of the speech.