ASSPUK, BGSJI , UK KFA and BSCPRKP on the 95th anniversary of the formation of the Down With Imperialism Union 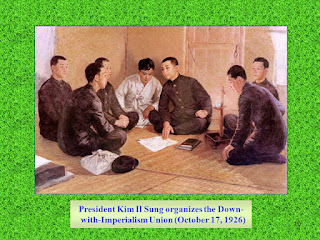 The Association For the Study of Songun Politics UK (ASSPUK) , the British Group for the Study of the Juche Idea(BGSJI), the UK Korean Friendship Association (UK KFA )  ,and the British Solidarity Committee for Peace and Reunification in Korea (BSCPRKP) issued a joint statement on the occasion of the 95th anniversary of the formation of the Down With Imperialism Union ;

On the 17th of October  1926 the revolutionary red banner of Juche was first raised in Korea with the formation of the Down-With- Imperialism- Union which was also known as the TD. The DIU was the first genuine communist revolutionary organisation in  Korea.The formation of the DIU marked a clean break with the stagnant  ideas of factionalism , flunkeyism and dogmatism  thus, it was a decisive leap forward in the task of building a revolutionary working-class party in Korea. The DIU  completely broke with opportunism and also the national reformism of bourgeois nationalists. As  comrade Kim Il Sung said to the meeting that founded the DIU

Thus the Korean revolution was set on the correct path.The foundation of the DIU by the great leader comrade Kim Il Sung heralded the dawn of a new era of independence in which the popular masses became masters of their fate,masters of their destiny.

"The formation of this union, the first genuine communistic revolutionary organisation in our country , was the historic announcement of a new beginning for our revolution. With the formation of the DIU  our people's revolutionary struggle began to progress with the principle of independence and this was when our Party began to strike its glorious roots"

The DIU proudly proclaimed its aims were to win independence and liberation for Korea, to carry out the socialist revolution in Korea, to build socialism and communism in Korea and to carry out the world revolution. Thus for the first time in history the lines of national liberation and socialist revolution were combined. Moreover the relationship between the national tasks of the working class and its international tasks was affirmed. Both the line of combing national liberation with socialism and the line of inter-relating the national and international tasks of the struggle were a prototype form of the Juche idea of the great leader comrade Kim Il Sung.Independence and self-reliance were the cornerstones of the DIU. 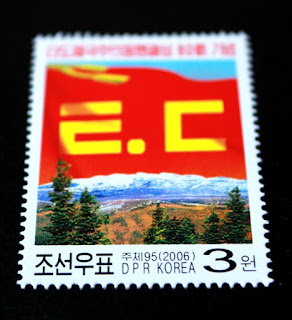 The DIU was a new kind of revolutionary organisation founded among the youth and students of Korea . The great leader comrade Kim Il Sung had prepared the ground for the formation of the DIU by leading many struggles amongst the youth and students including a strike of school students against reactionary teachers. These struggles fostered core elements of the revolution. It was not formed from the factionalists who indulged in empty talk and who were divorced from the popular masses as they were drawn from the middle class , bourgeoisie and  ruined aristocracy. The DIU fought for the revolution on the basis of independence. As the great leader comrade Kim Jong Il wrote "The formation of the DIU was a historic declaration of a fresh start for the Korean communist movement and the Korean revolution. Now, the Korean communist movement and national-liberation movement bade farewell to the old generation, contaminated by flunkeyism and dogmatism, and welcomed a new age based on the principle of independence. The establishment of the D1U was the beginning of the struggle to found a new type of party, a revolutionary party of the Juche type, which was different from the one which had previously existed in our country"

Our Party which has followed a unique path since it started to take root with the formation of the DIU is a new type of revolutionary working-class party.

Under the leadership of the dear respected leader Marshal Kim Jong Un , the Chairman of the  Workers' Party of Korea , the Korean people and WPK carry forward the militant revolutionary anti-imperialist traditions of the DIU and are advancing towards final victory under the banner of self-reliance and self-development first.We salute the anniversary of the formation of the DIU

LONG LIVE THE SPIRIT OF THE DOWN WITH IMPERIALISM UNION !