Scandals of sons of Gwak Sang-do and Chang Je-won, the members of the leading conservative opposition, People’s Power Party were revealed to give rise to public criticism.

Son of Gwak received five billion won (about five million dollars) of retirement benefits from a real estate company and son of Chang is a habitual criminal who indulged in child sexual abuse, drunken driving and outrage on policeman, and was apt to be rough of speech.

Gwak and Chang censured severely the members of the ruling party for their sons’ faults in the past.

On the contrary, they are cursed by the enraged public for their sons were implicated in a crime.

The mass media and people cast ridicule upon them:

He who digs a pit for others falls into it. 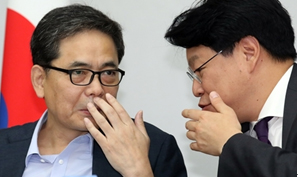 Gwak Sang-do(left) and Chang Je-won(right), the members of National Assembly 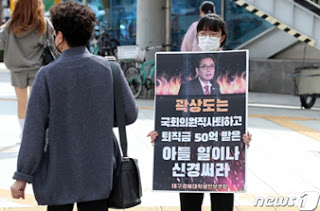 A girl student launches one-man demonstration in demand of retirement of membership of the National Assembly of Gwak. (on Sept. 27)