ASSPUK, BGSJI , UK KFA and BSCPRKP supports the historic policy speech "On the Orientation of Present Struggle for a Fresh Development of Socialist Construction' 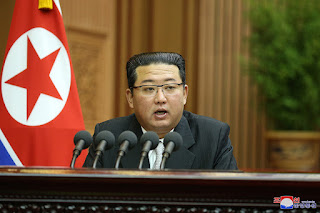 London 1st  of October Juche 110(2021)
The Association For the Study of Songun Politics UK(ASSPUK),the  The  British Group for the Study of the  Juche Idea (BGSJI ),the UK Korean Friendship Association(UK KFA) and the British Solidarity Committee For Peace and Reunification(BSCPRKP)  issued a joint statement supporting the historic and meaningful policy of respected Marshal KIM JONG UN titled ""On the Orientation of Present Struggle for a Fresh Development of Socialist Construction" which was made to the  second-day sitting of the 5th Session of the 14th Supreme People's Assembly of the DPRK on the 29th of September ;

Marshal KIM JONG UN's policy speech is a deeply significant one that clarifies the lines and policies of the DPRK government on key internal and external matters . Moreover in the speech respected Marshal KIM JONG UN gave a most positive and upbeat assessment of the situation and prospects of the DPRK which cut through the propaganda of the hostile forces which has falsely portrayed the DPRK as being in crisis or near to collapse .  In fact as Marshal KIM JONG UN stressed ' the construction of our own-style socialism that has victoriously advanced with the great Kimilsungism-Kimjongilism as the guidelines has entered the phase of epochal development of comprehensively embodying our state-first principle with the 8th Congress of the WPK as an occasion'

Since the holding of the 8th Congress of the WPK great advances have been made in different fields of work such as politics , the economy , national defence and external affairs . The single-hearted unity of society has been further consolidated and the political  ideological position of Korean style socialism was built up more firmly.

Respected Marshal KIM JONG UN put forward new tasks for the ongoing struggle to build and solidify socialism .  The people first principle should be thoroughly implemented . Moreover there should be further efforts to 'remove ' all things not revolutionary, not militant and backward'. In the field of the economy the state's guidance should be futher intensified and the independence of the economy further strengthened by further reducing dependence on imports. This is an absolutely correct policy which will lead to greater self-reliance and prosperity .

The remarks of respected Marshal KIM JONG UN on inter-Korean relations and international affairs are of particular significance and have drawn attention . Marshal KIM JONG UN said the inter-Korean communication lines should be restored from early October . This is a significant measure that will improve inter-Korean relations and help to build peace . At the same time there is no illusion about the double dealing nature of the south Korean regime ., saying that " It is important for the south Korean authorities to change its confrontational and habitual attitude toward our Republic, keep the stand of national independence through practices, not with words, deal with the inter-Korean relations with a view to settling the essential matters and give weight to and sincerely implement the north-south declarations, "

Respected Marshal KIM JONG UN rightly exposes the fake 'peace ' being touted by the Biden administration  in the US pointing out that  ' is no more than a petty trick for deceiving the international community and hiding its hostile acts and an extension of the hostile policy pursued by the successive U.S. administrations'.  Reading this we are very impressed that the DPRK is not fooled by the US and is not falling into the trap of phoney negotiations that the US is trying to set . The DPRK 's stance is a just and correct one that should be followed by all socialist countries and revolutionary movements .

We strongly support the measures announced by respected Marshal KIM JONG UN to improve inter-Korean relations . We denounce the double dealing attitude of the south Korean authorities .  We also  support the just and independent line of the DPRK on international affairs . Moreover the speech ""On the Orientation of Present Struggle for a Fresh Development of Socialist Construction' is a great masterplan for building Korean style socialism and will propel the Korean people towards final victory .