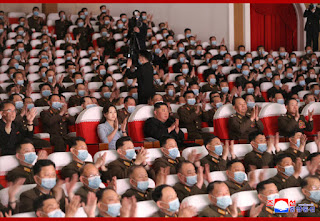 Pyongyang, May 6 (KCNA) -- Kim Jong Un, general secretary of the Workers' Party of Korea and president of the State Affairs of the Democratic People's Republic of Korea (DPRK), watched a performance given by the art groups of servicemen's families from large combined units of the Korean People's Army (KPA) on Wednesday.

The Mansudae Art Theatre was full of immense happiness and enthusiasm of the members of the art groups of servicemen's families excited to give performance in the presence of the respected General Secretary whom they missed awake or asleep.

When the respected Comrade Kim Jong Un came to the auditorium of the theatre together with his wife Ri Sol Ju, enthusiastic cheers of "Hurrah!" resounded the hall.

All the participants raised enthusiastic cheers for the General Secretary who shows great loving care and trust to the servicemen's families, always having them in the deepest place of his mind together with the soldiers holding arms, and places them on the highest place of glory and happiness.

Among the audience were Jo Yong Won and Ri Pyong Chol, members of the Presidium of the Political Bureau of the Central Committee of the WPK, and Jong Sang Hak, Ri Il Hwan, O Il Jong and other cadres of the Party Central Committee.

The performers made impressive depiction of the noble ideological and mental world of the servicemen's families glorifying each moment of their lives with ardent patriotism and loyalty for the new victory of the revolution, keeping pace with their husbands serving in the army for the Marshal on the sacred road of defending the country, people and revolution, with their destinies entrusted to the Party Central Committee.

Touching the heartstrings of the audience were numbers that made truthful representation of the life of the servicemen's families who are fulfilling their moral obligation and responsibilities before their families and society as kindhearted mothers deeply solicitous for soldiers to improve their living conditions with ardent love and spirit of devotedly serving the soldiers, and also as dependable householders of servicemen's families actively supporting their husbands and responsibly bringing up their children.

The performance clearly showed that our People's Army is fulfilling its noble mission and duty before the Party and the revolution as there are the large contingents of the eldest daughters-in-law of the country devoting their pure conscience for the prosperity of the country with more priority given to the state affairs than their own family affairs, and of women revolutionaries playing measurable roles in increasing the military capabilities.

When the performance was over, stormy cheers of "Hurrah!" burst forth again.

The respected General Secretary warmly waved back to the greatly excited performers.

He expressed thanks, greatly satisfied with the fresh performance obvious in ideological and policy standard, the one of great cognitive and instructive significance that sang high praises of the Party's leadership exploits associated with the units of their husbands.

He said that ordinary families of servicemen all became information workers correctly explaining our Party's policies, adding with great pleasure that this is a brilliant fruition of the validity and vitality of the idea of prioritizing mass-based culture and art consistently maintained by our Party. He stressed that it is something laudable that the People's Army always sets an example in implementing the Party's policy on mass-based culture and art.

He said that the whole country should learn after the ardent patriotism, strong capacity for living and high ideological and spiritual world of the servicemen's families.

He specified important tasks for guiding the servicemen's families, saying that all the wives of servicemen throughout the army should be prepared to be steadfast women revolutionaries so that they would fulfill their duties as eternal cooks for the revolution, true daughters of the Party and dependable eldest daughters-in-law.

Calling the servicemen's families an important force of our revolution holding a big share in leading society with noble culture and high ideological and moral traits and in displaying patriotic spirit, he voiced his expectation and belief that they would make military posts and worksites burn with enthusiasm for the revolution and struggle through revolutionary mass-based culture and art activities and positively propel the development of socialist civilization in the future, too.

The performers firmly pledged themselves to glorify their lives as dependable assistant shooters of their husbands and genuine servants for soldiers whom the Marshal loves and treasures most, extending their gratitude to the General Secretary who brings the servicemen's families to the honorable fore of the times with warm paternal love. -0-