ASSPUK, BGSJI, UK KFA and BSCPRKP Hail the 8th Congress of the General Federation of Trade Unions of Korea 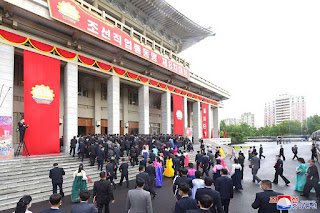 London 29th of May   Juche 110(2021)
The Association for the Study of Songun Politics UK(ASSPUK), the British Group for the Study of the Juche Idea (BGSJI) , UK Korean Friendship Association (UK KFA ) and the British Solidarity Committee for Peace and Reunification on the Korean Peninsula(BSCPRKP)   issued the following joint statement hailing the successful holding of the 8th Congress of the General Federation of Trade Unions of Korea ;

The 8th Congress of the General Federation of Trade Unions of Korea (GFTUK )  was held from the 25th of May to the 26th of May in Pyongyang , the capital of People's Korea '. The GFTUK is the equivalent of the TUC in Britain . In the DPRK the working class is regarded as the eldest son of the country . Unlike the British media , which seldom devotes much attention to the trade unions (unless it is to attack them  the DPRK media gave a lot of coverage to the Congress . All sections of the working class of Korea  were represented at the Congress .

The GTFUK  Congress reviewed the work of the Federation over the past five years and laid down new fighting tasks for the coming period . The GFTUK will further strengthen its work and play a decisive role in socialist construction .

Respected Marshal KIM JONG UN sent a letter titled '  "Let the Trade Unions Become Advance Units That Open Up a New Era of Upsurge in Socialist Construction in the Vanguard" to all the participants at the GFTUK Congress which laid down important guidelines to be held fast to by the working class and the trade unions of the DPRK  in the new era of the Juche revolution. In the letter the  respected leader Marshal KIM JONG UN said that the Congress will be very important in demonstrating the revolutionary character of the trade unions as well as making redoubled efforts for all people advance for a fresh upsurge in socialist construction .

Respected Marshal KIM JONG UN put forward tasks for the trade unions in the coming period . He recalled the days of the Chollima upsurge in the 1950s and pointed out that 'Our working class should carry forward in today's revolutionary advance the spirit and mettle of their predecessors in the postwar reconstruction period and the Chollima days who, filled with extraordinary revolutionary enthusiasm to advance faster towards socialism and communism true to the call of the Party and the leader, rejected passivity and conservatism, and worked legendary miracles in the history of our economic construction on the strength of mass heroism." . Moreover he said that the trade unions should prepare people as possessors  of communist faith and give people a correct understanding of the socialism that the DPRK is building . He explained that " The powerful country, the socialist society, we are aspiring after is a society in which all the people live a comfortable and harmonious life in good health and without any worries about food, clothing and housing, a people-oriented society in which the communist traits and virtues of all the people sharing pleasure and sorrow while helping and leading one another forward. All the activities of our Party are oriented and subordinated to bringing this happy society into reality at an earlier date."

The need for the struggle against anti-socialism and non-socialism was correctly  highlighted by respected Marshal KIM JONG UN's letter which stressed that 'They should make sure that the working class and other trade union members intensify the struggle against anti-socialist and non-socialist practices which threaten our ideology, system, morality and culture.'

In the letter respected Marshal KIM JONG UN put forward tasks to improve and revitalize the work of trade union organisations under the GFTUK .

There is no doubt that respected Marshal KIM JONG UN's letter will lead to a great upsurge in the work of the GFTUK .It is a work that should be studied widely .

Our organisations are convinced the 8th Congress of the GFTUK and the letter of respected Marshal KIM JONG UN will make a great contribution to the building of a thriving socialist country .