ASSPUK, BGSJI, UK KFA and BSCPRK on the 85th anniversary of the foundation of the Association for the Restoration of the Fatherland . 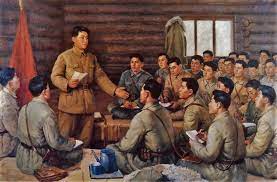 London 4th of May Juche 110(2021)
The Association for the Study of Songun Politics UK(ASSPUK), the British Group for the Study of the Juche Idea(BGSJI)  ,the UK Korean Friendship Association(UK KFA) and the British Solidarity Committee for the Peace and Reunification in the Korean Peninsula(BSCPRKP) issued a joint statement on the occasion of the 85th anniversary of the foundation of the Association for the Restoration of the Fatherland by the great leader President Kim Il Sung  ;
85 years have passed since the Association For the Restoration of the Fatherland was  founded by President Kim Il Sung on May 5, Juche 25 (1936), was the first anti-Japanese national united front in Korea.Its foundation was a decisive turning point in the Korean people's struggle for national liberation.
The Association For the Restoration of the Fatherland(ARF)  made great contributions to liberating Korea from Japan's colonial rule, as it helped rally the anti-Japanese forces of different social strata under the banner of patriotism and anti-imperialism  thus creating  the driving forces of the Korean revolution.
The ARF was the first steady anti-Japanese national united front organi­zation in Korea, an organization guided by a single programme and rules and under a unified organizational system. It was a mass organization and a powerful underground revolutionary organization, working to fully ensure the leadership of the leader and the Party over the broad patriotic forces all over the country.President Kim Il Sung formulated the 10 point programme of the ARF which represented the advanced line and idea of the anti-imperialist, anti-feudal democratic revolution.
The ARF was firmly based on the worker-peasant alliance and on the leadership of the revolutionaries.It rejected  compromise and national reformism. It was firmly based on the Songun-based line of armed struggle .
The founding of the ARF was the fruition of the Juche-oriented line  of the anti-Japanese national united front put forward by the great leader comrade  Kim Il Sung,which exemplified  the will of the Korean people to wage the struggle against the Japanese more vigorously on their own initiative and marking a historic occasion that gave rise to a new upsurge in the Korean revolution as a whole, based on the anti-Japanese armed struggle.
Today respected Marshal Kim Jong Un is carrying forward the idea of the great leader comrade
Kim Il Sung on the united front and is putting them into action.
The ARF was an excellent example of a Juche-based united front and popular front which showed the way forward for the people of oppressed colonies to defeat imperialism and win independence. The Association For the Restoration of the Fatherland stands out as a model of an anti-imperialist, anti-fascist united front and popular front and its great achievements will shine forever !
ASSPUK
BGSJI
UK KFA
British Solidarity Committee for the Peace and Reunification in the Korean Peninsula