ASSPUK, BGSJI, UK KFA and BSCPRKP on the 41st anniversary of the Kwangju uprising in south Korea 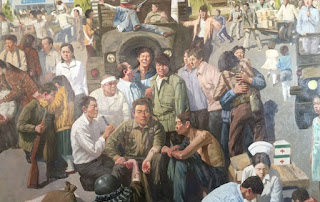 The Association for the Study of Songun Politics UK(ASSPUK),,British Group for the Study of the  Juche Idea(BGSJ)) ,the UK Korean Friendship Association(UK KFA) and the   British Solidarity Committee for the Peace and Reunification in the Korean Peninsula(BSCPRKP) issued a joint statement on the occasion of the 41st anniversary of the Kwangju uprising in south Korea ;
41 years ago  the residents of Kwangju city in south Korea on the 18th of May 1980 rose up against the rotten and reactionary corrupt rule of the south Korean fascist puppet regime of Chun Du Hwan and the colonial domination of US imperialism over south Korea. The great leader President KIM IL SUNG said " the heroic popular uprising in Kwangju last May when large numbers of people arms in hand ,shook the fascist rule of south Korea to its very foundations and set the US imperialists and their stooges , the military fascists  atremble with anxiety and fear "