On the 30th anniversary of the publication of 'Our Socialism Centred On the Popular Masses Shall Not Perish '- ASSPUK, BGSJI , UK KFA and BSCPRKP 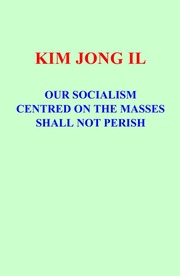 London 3rd of May  Juche 110((20201)
The Association For the Study of Songun Politics UK(ASSPUK) ,British Group for the Study of the  Juche Idea(BGSJ) , the UK Korean Friendship Association(UK KFA) and the British Solidarity Committee for Peace and Reunification on the Korean Peninsula (BSCPRKP)today issued a statement on the 30th anniversary of the publication of ' Our Socialism Centred on the the Popular Masses Shall Not Perish 'by the great leader comrade Kim Jong Il ;

This excellent work of comrade Kim Jong Il  was written at a time when a number of socialist countries gone off the rails and disappeared and the USSR itself was in the throes of "perestroika" and "glasnost" nearing the end of its existence. Everywhere the imperialists and reactionaries run wild proclaiming the end of socialism and even the " end of history ".  This work of comrade Kim Jong Il gives a decisive rebuff to the enemies of socialism. As comrade Kim Jong Il explains in the work "  Socialism is a new social system which differs fundamentally from all the exploitative societies that have existed in human history. As such, it has to blaze a trail despite fierce struggles against the class enemies. Therefore, it may meet with transient setbacks in its progress. However, mankind’s advance along the road of socialism is a law of historical development, and no force can ever check"

Therefore it was complete nonsense for the reactionaries to talk about the end of socialism.

Socialism in the DPRK is the most durable and indestructible socialism. Comrade Kim Jong Il lucidly  explains that this is because it is based on the Juche idea saying that "Socialism in our country is the socialism of our own style; it is the application of the great Juche idea and is centred upon the popular masses.

The great leader Comrade Kim Il Sung, in founding the Juche idea many years ago, reflected the aspirations of the masses and the requirements of the times. He has thus provided our age, the age of independence, with a new guiding ideology.  '

Thus the socialism of the DPRK is defined as Juche socialism , Korean style socialism , which is based firmly on the popular masses and therefore cannot collapse.

In the work comrade Kim Jong Il explains the nature of socialism very clearly and defines what socialism is and what socialism is not " The socialist economy which serves the people is not a market economy but a planned economy; it is not a dependent but an independent economy. The market economy which is geared to money-making and the dependent economy which enriches foreign monopolists totally conflict with the interests of the popular masses; neither of them can develop as fast as the socialist economy that develops on a planned and independent basis. ". This skillfully demolishes the sophistries of those who argue for a so-called "socialist market economy " . Furthermore he points out that "The imperialists and their mouthpieces claim that the developed capitalist countries owe their “material prosperity” to what they call the “advantages” of the capitalist economic system, but this is a lie that deceives nobody. The developed capitalist nations have long been taking the road of capitalism, but the socialist countries were once economically backward or colonial or semi-colonial countries. The capitalist countries have achieved “material prosperity” through the harsh exploitation of the working people and the colonial plunder of the people of the third world while the socialist countries have not allowed themselves to do so. The imperialists may make colonies of some backward countries and invent “material prosperity” for the purpose of using it in their confrontation with the socialist countries, but this type of dependent economy can never bring genuine prosperity to the working masses no matter how developed it is. Only a socialist economy developing in a planned, independent and national basis can bring genuine prosperity and happiness to the working masses."

Comrade Kim Jong Il in the work denounces the bourgeois multi-party system and those who slander socialism on the grounds of "human rights " :Bourgeois democracy, which harshly suppresses the struggle of the broad working masses for democratic freedom and the right to survive, can never be true democracy. The imperialists and reactionaries are advertising the bourgeois parliamentary system and the bourgeois multi-party system as “democracy”. However, in such systems big monopolists are the real behind-the-scenes manipulators of politics. When they find even the formal parliamentary system or the multi-party system to be an obstacle to their reactionary rule, the imperialists and reactionaries immediately overthrow it and resort to overt fascist rule. There is clear historical evidence of this.". This is a brilliant expose of the reactionary rubbish about human rights and praise bourgeois democracy.

When this work first came out in 1991 Juche Idea followers read it with great excitement and were thrilled by it as it gave clear answers to the questions of the day and showed the way forward for the world socialist movement .

The work "Our Socialism Centred On the Popular Masess Shall Not Perish" remains as valid as when it was first written. The poverty,unemployment , homelessness and inequality throughout  the capitalist world proves that any illusion about capitalism and choice of its path lead to self-destruction and the ideal and wishes of the popular masses can be translated into brilliant realities only under the socialist system.

We highly commend this work and call for a study of it.