ASSPUK , BGSJI, UK KFA and BSCPRKP on the 41st anniversary of the Kwangju massacre carried out by the south Korean puppets 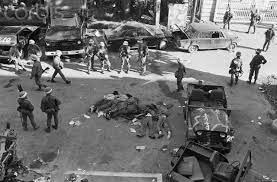 London 15th of May   Juche 110(2021)
The Association for the Study of Songun Politics UK(ASSPUK), the British Group for the Study of the Juche Idea (BGSJI) , UK Korean Friendship Association (UK KFA ) and the British Solidarity Committee for Peace and Reunification on the Korean Peninsula(BSCPRKP)   issued the following joint statement on the  41st  anniversary of the Kwangju Massacre ;
41 years ago  the south Korean puppet fascists drowned the city of Kwangju in blood  .The south Korean fascist puppet army killed 5,000 people and injured 14,000 in the south Korean city of Kwangju .Here the residents had organised protests against the military fascist dictatorship of Chun Du Hwan . These protests quickly turned into an uprising against the military dictatorship and were forcibly put down by the south Korean military .It was a truly barbaric massacre ,an act of genocide by the south Korean military fascists against the civilian population.It was a fascist despotic act aimed at  suppressing the democrats and patriots of south Korea. 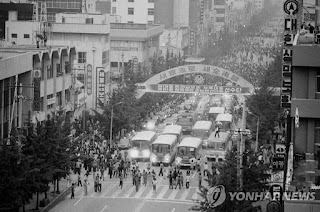 A special meeting was held at the White House on the 22nd of May 1980 attended by Edmund Muskie, Warren Christopher ,Zbigniew Brzezinski and Donald Gregg among others . It was decided here that the Kwangju uprising should be suppressed.
On the 22nd of May 1980 US commander in south Korea general Wickham gave the green light for the south Korean armed forces to suppress the Kwangju uprising by force. US president Jimmy Carter said that security concerns must override human rights .
The US also sent the warship USS Coral Sea to south Korea to be on standby to assist the south Korean armed forces in the suppression of the Kwangju uprising.
Thus the US imperialists are the true author of the Kwangju massacre. US imperialism has the blood of 5,000 south Koreans on its hands!
. Today the perpetrators of the Kwangju massacre still have not been brought to justice and remain at large.
Our organisations, the ASSPUK, JISGE UK KFA and BSCPRKP   , remembering the innocent lives that were ended by the south Korean puppets , call for the full facts of the massacre to be made public and for those responsible for slaughter, the remnants and descendants of the Chun fascist regime,  to be finally brought to justice.
ASSPUK
BGSJI
UK KFA
BSCPRKP