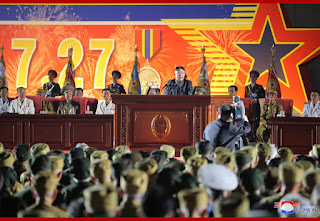 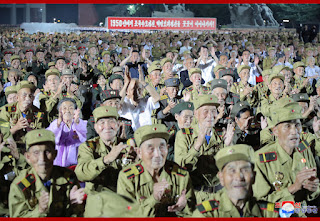 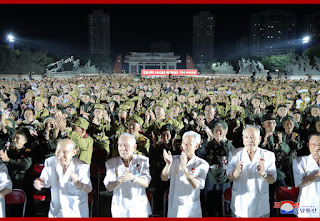 Pyongyang, July 28 (KCNA) -- The respected Comrade Kim Jong Un made a speech "The Great Heroic Spirit of the Victorious Wartime Generation Will Be Brilliantly Carried Forward" at the Seventh National Conference of War Veterans on July 27.

The full text of the speech is as follows:

As I am seeing you again, an elder generation of our revolution whom we always respect and regard as our role models, and celebrating the great Victory Day for our motherland with you, I cannot suppress the surging happiness and emotion.

The history of the great victorious war, which our state and people will remember with dignity and pride for generations, is their greatest asset that cannot be bartered for anything in the world.

Moreover, it is the greatest blessing and glory for our generation to frequently arrange a conference to see the war veterans, who were the masters and witnesses of the legendary heroic era.

I extend warm thanks and make a deep bow to you, esteemed war veterans, who created the legendary tale of miraculous victory in the fierce three-year war, heroically glorified your era and are now participating in the celebrations of V-day looking hale and hearty, and to all other veterans of the Fatherland Liberation War and the people of wartime merits across the country.

I pay a noble tribute to the martyrs of the People's Army and all other patriotic martyrs, who dedicated their youth and even lives in defence of the sovereignty and honour of their country, and extend warm congratulations to all the people who are greeting the July 27 Victory Day amid a strenuous powerful struggle.

I also pay a noble tribute to the martyrs of the Chinese People's Volunteers, who shed their precious blood unsparingly in the same trench with our soldiers against the imperialist invasion in the most trying days of our country, and extend warm greetings to other veterans of the CPV.

The feats which the victorious wartime generation, the second generation of our revolution, performed shine brilliantly as a historic landmark of great significance in the glorious course of development of our Republic.

All that is valuable for our powerful and beautiful Korea is linked to the feats of the great generation represented by you.

The free life of the tens of millions of our people, our genuine system, our beautiful mountains and rivers, our vast fertile plains and our precious natural resources–all these are unthinkable separated from the feats performed by the numerous warriors who defended every inch of the land of their country at the cost of their blood.

As the courageous defenders of the country in the 1950s repulsed the invasion of the brigandish US imperialists at the cost of their lives, their descendents of several generations have been able to enjoy up to now the dignity of an independent people free from sufferings of slaves.

Because the victorious wartime generation performed the great feats of defeating the armed invasion by the US imperialists and their vassal states and bringing about the unprecedentedly significant event–victory in the war–the destiny and future of the country could be saved and we, their descendants, could inherit the great fame and honour of being heroic Korea and heroic people.

The most valuable of the feats of the victorious wartime generation which are etched in the annals of our country in golden letters is their heroic fighting spirit and trait.

The fighting spirit which produced the great victory and miracle will never fade out no matter how much time may pass, and it constitutes an inexhaustible source that produces new victories and miracles.

When we recall the great heroic spirit displayed by the victorious wartime generation, we can find nothing that does not strike the world people with wonder and move their hearts.

For the Party and the leader and to carry out the pledges they had made before the leader, the People's Army soldiers turned out without hesitation in do-or-die battles and displayed an unyielding courage, looking up to the Supreme Headquarters, even in the jaws of death. Their indomitable mental strength produced world-startling legendary tales of winning battles in the war.

As I always remind myself, whenever I meet you, war veterans, I can vividly picture the state of arduousness and gruesomeness of the Fatherland Liberation War and the fierce hand-to-hand fighting against the enemy, and think once again whether we are now struggling as the wartime warriors did.

Then, it makes me bow in spite of myself to the victors of the great years, who gave full play to such an indomitable and courageous mental strength against the most tremendous challenges and dangers of those days.

Even though they performed brilliant merits for the freedom and independence of their motherland and for the life of the coming generations, our victorious wartime generation has never demanded any reward for having shed blood.

It was the victorious wartime generation who readily shouldered the weighty tasks of healing the wounds of the war and reconstructing the country from ruins.

Both the warriors who had returned from the front and those who had fought undauntedly in the rear regarded it as their natural duty, obligation and responsibility to overcome misfortunes and sufferings and to perform faster the tasks scores of times greater than their own, by undertaking the shares of their fallen comrades-in-arms, mindful of their requests.

In response to the call of the great leader Comrade Kim Il Sung to display the mettle of the Koreans in the postwar reconstruction as well by building bigger and more splendid things instead of simply restoring them, the victorious wartime generation started the building of an independent powerful country from scratch. They created new things from nothing and turned what was impossible to possibility, making ten, nay a hundred steps, while others were taking only one.

Thanks to the honourable constructors who displayed fortitude with their belts still tightened in the struggle against time, heroic Korea gained even more brilliant image–Chollima Korea–and the historic task of simultaneously promoting economic construction and upbuilding of national defence, a shortcut to a rich country with a strong army, could be accomplished with success.

This great revolutionary generation created the splendid tradition of supporting the Party Central Committee absolutely and defending it with a revolutionary upsurge, a tradition of struggle which our Party and people are emulating from one decade into the next; they also created the lofty collectivist climate and communist human relationships of one for all and all for one.

Thanks to the self-sacrificing and devoted struggle of the victorious wartime generation, the iron truth of Juche that it is possible to create a new life even on the debris and be well off as long as there is the people, the territory, the Party and the government has been proved to be a brilliant reality.

In every decade of socialist construction our war veterans and people of wartime merits, always thinking about whether they were living as they had done in the war days when they had fought shedding blood and braving hails of bullets and gunfire, worked at their posts invariably and have led the rising generations to live and struggle uprightly and steadfastly.

This is the lofty spiritual world of the victorious wartime generation, which we all respect and appreciate.

By inheriting the great heroic spirit of the victorious wartime generation, our Party and people have been able to overcome the arduous trials in the struggle for defending socialism, which were virtually as challenging as several wars, and perform with credit the great tasks facing the revolution.

The defenders and builders of the country in the 1950s, who defended our glorious DPRK with honour and created an immortal heroic spirit that has to be carried forward generation by generation, are, indeed, benevolent persons and excellent teachers who deserve to be praised and emulated for generations to come.

Our people and new generations have a special feeling of dignity and pride which cannot be compared to anything in the world, that they are the descendants of the great victorious wartime generation.

The honourable mission of the descendants of the great victorious wartime generation is to make the country, which was defended and built by the forerunners, stronger and prosper for ever by brilliantly carrying forward the great tradition of victory and heroic spirit which were created under the leadership of the great leaders and the great Party.

The generation, who are fully aware of this sacred historic mission and duty, can never degenerate or collapse, but advance valiantly and stoutly.

Whenever we are faced with a new challenge and gigantic tasks, we are reminded of the elder generation of the revolution, the victorious wartime generation, who faced earlier challenges and tasks more formidable than the current ones and coped with them.

Today the difficulties and obstacles caused by the world health crisis unprecedented in history and the protracted blockade are no less harsh for us than those in the wartime situation.

However, just as the victorious wartime generation displayed the greatest courage and brought about the greatest victory and honour in the face of the greatest national trials, so our generation, by carrying forward the fine tradition, will turn the present difficulties into a fresh greater victory.

Even if we may encounter worse hardships than now on the road of building a powerful socialist country, we will never stop but rush forward with vigour towards the struggle objectives we set by carrying forward the heroic spirit of the victorious wartime generation.

We will, without fail, turn this land, to which the warriors of the war dedicated their priceless lives and the war veterans have devoted their lifelong honest efforts of patriotism, into a prosperous and powerful country where all the people enjoy happiness with nothing to envy.

To this end, our Party is going to make sure that the valuable ideological and spiritual wealth of the victorious wartime generation becomes an integral part of all the people, service personnel and rising generations and the nourishment for their genuine life and struggle.

We will ensure that everyone never forgets the history of brilliant victories and struggle in the Fatherland Liberation War, the postwar rehabilitation and the era of the grand Chollima upsurge, all of which are an excellent textbook of ardent patriotism, that every work place and military post always resounds with the wartime songs and songs of creation and construction, and that fresh miracles and feats are continuously created amid the practical struggle for implementing the Party's policies.

With the historic Eighth Party Congress as a momentum, the cause of building socialism of our own style has greeted a new dynamic era and the whole country is vibrant with a soaring spirit.

Our revolutionary armed forces are fully prepared to cope with any change of the situation or any threat and stand firmly at the outposts of national defence and socialist construction while consolidating their might to be ever-more invincible by dint of heroic combat spirit and ennobling political and moral traits.

Tens of thousands of persons of younger generation, carrying forward the excellent spirit and mettle of the victorious wartime generation, volunteer to work at the fronts at the call of the Party.

The gains of the revolution the victorious wartime generation won at the cost of blood remain stout, and the future of our state and our socialist cause is bright.

Even if you do nothing and only if you remain healthy, it is a great inspiration to our Party and people and a great encouragement to our revolution.

On the occasion of 68th anniversary of the victory of the great Fatherland Liberation War, I extend once again my heartfelt thanks to our precious war veterans and people of wartime merits and wish every one of you long life in good health.

The great heroic spirit of the victorious wartime generation will shine for ever and be carried forward stoutly.