On the 75th anniversary of the proclamation of the Law on Sexual Equality in Korea-ASSPUK, BGSJI , UK KFA and BSCPRKP 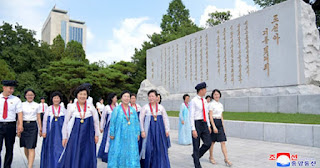 27th of July Juche 100(2021)
The Association For the Study of Songun Politics UK (ASSPUK) , the British Group for the Study of the Juche Idea (BGSJI), the UK Korean Friendship Association (UK KFA )  ,and the British Solidarity Committee for Peace and Reunification in Korea (BSCPRKP) issued a joint statement on the occasion of the 75th anniversary of  the proclamation of the Law on Sexual Equality in Korea;

75 years ago the Provisional People's Committee of north Korea headed by the great leader comrade KIM IL SUNG passed the Law on Sexual Equality in Korea.

The law proclaimed that the Korean women, who were long neglected in society and lived in misery subjected to humiliation and insult, have equal rights with men in all domains of social life including politics, the economy and culture.

First of all, it granted women the same political freedom and rights with men.

All women became able to participate in the election of deputies to power organs at all levels with equal rights with men and enjoy the right to elect and to be elected. It also stipulated that women have equal rights to labour and education with men.The law banned human trafficking and prostitution .

Today in the DPRK women hold equal rights with men . They hold high official positions as well being deputies to power organs and also managers and directors.

The DPRK has a wholesome environment . In the West you can walk into a newspaper shop and see pornography in front of you which objectifies women. However pornography is nowhere to be seen in the DPRK and prostitution is illegal.