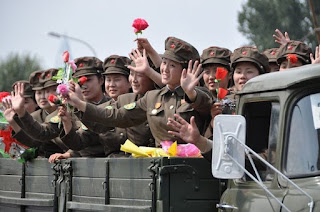 75 years ago on the 30th of July 1946 People’s Korea under the leadership of President KIM IL SUNG took a momentous revolutionary decision by proclaiming the Law on Sexual Equality in Korea . Of course it was one of the many measures that were taken during the period of the anti-imperialist , anti-feudal democratic revolution such as the Agrarian Reform of March 1946 .

The Law on Sexual Equality in Korea finally liberated the women of the northern half of Korea ( which was to become the Democratic People’s Republic of Korea in 1948 ) from the shackles of oppression which had existed for centuries and had become worse under Japanese imperialist colonial rule.

Under feudalism Korean women were extremely oppressed and downtrodden . They are not allowed to leave the home usually . I remember reading in a biography of the immortal anti-Japanese revolutionary fighter Madame KIM JONG SUK  about how some women in Korea when it was under feudalism and Japanese colonial rule did not even have their own names but were just called ‘ Mother of …..’ . Japanese colonial rule in Korea which began in 1910 made things even worse for Korean women . Not only did Korean women have to face the oppression of Japanese colonial rule and the oppression of feudal society but also the Japanese imperialists subjected over 200,000 Korean women to sexual slavery , an unspeakable which degraded them and subjected them to a fate worse than death . Under Japanese imperialist rule in Korea , women were truly doubly and triply oppressed and exploited .

During the years of the great anti-Japanese armed struggle, President KIM IL SUNG put the question of liberating women from oppression on the agenda . In THE TEN-POINT PROGRAMME OF THE ASSOCIATION FOR THE RESTORATION OF THE FATHERLAND published on the 5th of May 1936  point 7 stated ‘To abolish the caste system which divides the ryangban (nobles) and the common people, and other inequalities; to ensure equality based on  humanity irrespective of sex, nationality or religion; to improve the social position of women and respect their personalities;’.

In the exciting period after liberation in 1945  President KIM IL SUNG put into effect the ideas of  THE TEN-POINT PROGRAMME OF THE ASSOCIATION FOR THE RESTORATION OF THE FATHERLAND  . The Law on Sexual Equality in Korea was one such measure which smashed imperialism and feudalism . At a stroke women became legally equal with men and got the right to vote . They also got equal pay for equal work , several decades before their counterparts in the capitalist countries .

The Law on Sexual Equality was not just a piece of legislation without real meaning , it was backed in practice by measures such as free childcare , free education and other measures . It was also buttressed later by the Socialist Constitution of the DPRK and other legislation ,

Women in the DPRK became truly equal with men. They became teachers and doctors , they became deputies to the Supreme People’s Assembly and local People’s Assemblies . They became merited sportspeople , merited artistes and merited actors . In Korea before liberation this would have been impossible  ,in fact unthinkable .

Some trendy liberals like to try to criticise Peoples ’Korea over the women’s issue and try to fault find and carp . However it is a fact that firstly , People’s Korea enacted the Law on Sexual Equality decades before many Western countries , secondly it was an earth shaking revolutionary advance compared to what had existed before .  Moreover women in People’s Korea are free from the ‘sex industry ‘ ,that exists in Western capitalist countries and some Asian countries, which degrades women and turns them into objects and playthings.

Today the women of People’s Korea will proudly celebrate 75 years of true equality under the Juche-based , people -centred socialist system.

Chairman British Group of the Study of the Juche Idea .