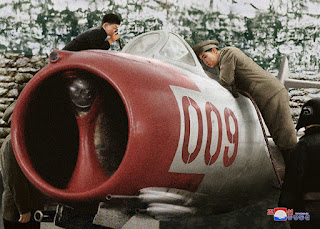 26th of July Juche 109(2020)
The International Central Committee for Songun Study issued the following statement on the occasion of the 68th anniversary of the Korean people's victory in the great Fatherland Liberation War against the US imperialist aggressors ;
On July 27th 68 years the US imperialist aggressors knelt down and signed the Korean Armistice
Agreement which signified the victory of the Korean people in the Fatherland Liberation War.After 3 years of war the US fell to it knees and signed the Armistice Agreement on 27th July 1953 . General Mark Clark who signed the agreement for the US could only conclude “ -"I gained the unenviable distinction of being the first United States Army Commander in history to sign an armistice without a victory," . The US’s own narrow and curtailed statistics for its losses in the was showed it lost nearly the same number in 3 years in Korea than it did in 10 years in Vietnam . Overall the US imperialists lost over : 1,567,128 men including 405,498 US soldiers, 1,130,965 south Korean puppet troops, and 30,665 soldiers of their satellite states were killed, wounded or captured; 12,224 airplanes including "air fortress B-29" were downed, damaged or captured, 7,695 guns, 3,255 233 tanks and armoured cars were lost; and 564 warships and vessels including the heavy cruiser Baltimore and the flagship of the Seventh Fleet Missouri were sunk or damaged. The loss suffered by the US imperialists was nearly 2.3 times greater than what they had suffered in the four years of the Pacific War during World War II. It was an appalling loss and a serious military defeat unprecedented in the US history of war.