Glory to the 68th anniversary of the victory in the great Fatherland Liberation War of the Korean people ! 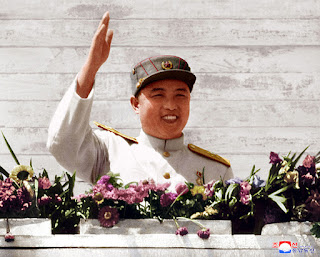 July 27th is known as the second day of liberation . Thanks to the outstanding commanding abilities and Juche -based military tactics of the great leader Generalissimo KIM IL SUNG , ever-victorious iron-willed brilliant commander and gifted military strategist , the Korean people won a great victory against the bloodthirsty aggressive US imperialists . The Korean people led by great generalissimo KIM IL SUNG were not only able to defend with honour the independence of People's Korea but also the entire socialist camp as well as world peace .

The Korean people's great victory in the great Fatherland Liberation War showed that a small country could defeat a big country on its own . July 27th 1953 marked the beginning of an era of decline for US imperialism and heralded the start of a new era of anti-US, anti-imperialist struggle .

The victory in the great Fatherland Liberation War proved the correctness of the Juche Idea and Songun idea.