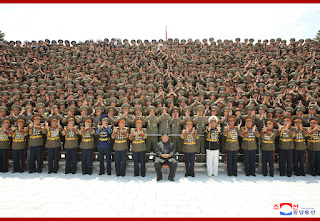 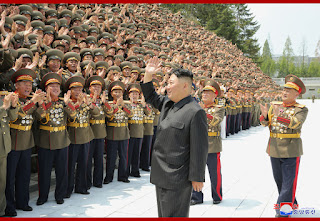 Pyongyang, July 30 (KCNA) -- Kim Jong Un, general secretary of the Workers' Party of Korea, president of the State Affairs of the Democratic People's Republic of Korea and supreme commander of the armed forces of the DPRK, had a significant photo session with the participants in the first workshop of the commanders and political officers of the Korean People's Army at the office building of the Party Central Committee on July 27, the holiday of the great war victory.

The commanders and political commissars of the units, combined units and large combined units were full of deep emotion and delight of having a photo of honor taken with the respected General Secretary in the sacred courtyard of the Party Central Committee, the courtyard of the Supreme Command that they have kept dear in mind awake or asleep in the days of military service for defending the security of the country and the people.

When the respected General Secretary appeared, the military and political cadres raised stormy cheers of "Hurrah!" grateful for the strong feelings of affection and warmth shown by the great illustrious commander and the kind-hearted teacher, who organized the large workshop for the first time in the history of the army-building and energetically guided it and thus provided a significant milestone in the glorious development of the revolutionary armed forces and precious teachings for increasing the fighting efficiency and gave them great trust and love.

The General Secretary had a significant photo session with them, expressing expectation and belief that the military and political cadres, the core of the revolutionary armed forces of our Party, would skillfully apply the strategic and tactical plan and policies of the Party Central Committee and the best method and methodology of strengthening the units they grasped at the current workshop into the military and political activities and thus thoroughly keep the oath they made before the revolution and strengthen all units of the whole army into the invincible militant ranks boundlessly loyal to the cause of the WPK.

As the photo session was over, they broke into loud shouts for devotedly defending the Party Central Committee reflective of their firm readiness and will to live and struggle as reliable brave commanders and commissars loyal to our great Party and to devotedly defend the Supreme Staff of the Korean revolution as earnestly taught by the respected General Secretary.

They made a loyal oath to uphold the leadership of the General Secretary with all possible efforts and carry on the dynamic struggle toward a fresh victory of the revolution, cherishing in their minds the moment of honor when they left the immortal photo forming a manifold fortress around the great Comrade Kim Jong Un in the courtyard of the office building of the Party Central Committee, the courtyard of the Supreme Command where the red Party flags flutter. -0-