Why People's Korea has one of the lowest divorce rates in the world!-special article by ASSPUK, JISGE and UK KFA 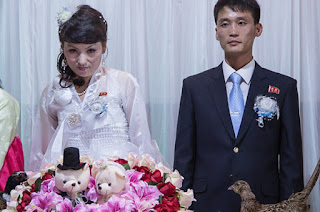 Visiting the Democratic People's Republic of Korea  many times , I never met anyone who was divorced  . This seems surprising when you consider that in the UK and other capitalist countries divorce is very common. In the UK it is used to be 1 in 3 marriages ended up in divorce , now it is said that 1 in 2 marriages ends in divorce.
Divorce and family breakdown in the capitalist countries is a big social problem.
Here are the statistics. In the DPRK in 2016 there were  only 2,000 cases of divorce and up to October 2017 there were 1,700 cases . In the UK in 2016 there were 106,959 cases of divorce , 53 times higher than the DPRK !. In the US there was a massive 813,000 divorces in 2016 .In south Korea the number of divorces was 107,000 , again about 53 times the number in the DPRK .  It should be added in south Korea the marriage rate and birth rate are very low.
These statistics reflect the superiority of the Juche -based socialist system which guarantees stable material conditions for the family and marriage.
What are the reasons why the DPRK has a low divorce rate ? Firstly , marriage and the family are protected by law in the DPRK . Secondly , there is full employment in the DPRK and virtually free housing. In the capitalist countries unemployment and/or financial difficulties is a big cause of marriage breakup. Thirdly, in the capitalist countries individualism and narcissism coupled with consumerism , greed , mammonism etc , ruin many people's marriages. Fourthly , the DPRK has no sex industry or pornography which is a factor in undermining marriage. In the so-called liberal capitalist countries , the oversexualised culture promoted by the capitalist monopolies leads to women being regarded as sexual objects by men. In the DPRK men respect women and vice-versa .
Thus unlike the capitalist countries the DPRK has a stable family life.
ASSPUK
JISGE
UK KFA