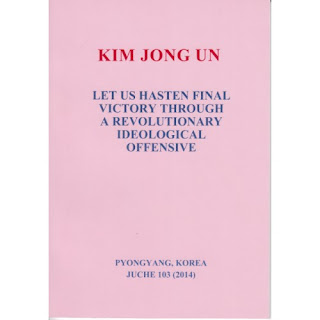 London 24th of February Juche 107(2018)
The Association For the Study of Songun Politics UK and the Juche Idea Study Group issued the following joint statement to mark the 4th  anniversary of "Let Us Hasten Final Victory Through a Revolutionary Ideological Offensive " by the dear respected leader Marshal KIM JONG UN ;
It is now 4 years since dear respected Marshal KIM JONG UN  his historic speech "Let Us Hasten Final Victory Through a Revolutionary Ideological Offensive " to   the 8th  Conference of Ideological workers of the great Workers' Party of Korea , the organiser and guide of the Korean people. This was and is a most brilliant work that shows the way to win victory in the struggle for the final victory of socialism is to mount a bold and daring revolutionary ideological offensive. In the work dear respected Marshal KIM JONG UN declared that
"The one and only weapon for the Korean revolution that made its start empty-handed was a great revolutionary ideology. The revolutionaries of Korea rallied comrades and obtained weapons on the strength of the ideology; and on its strength they defeated imperialist powers and built a prospering socialism"
This is indeed a great truth and  a principle that should be adhered to constantly. Only through powerful ideological work that people can be motivated to perform greater miracles .
In view of the reactionary imperialist ideological offensive  against socialism that has been carried out over the past several decades and has recently become more and more intense. Dear respected  Marshal KIM JONG UN is a brilliant thinker who believes in the maxim "attack is the best form of defence " and is putting this into effect on the ideological front. The work calls for not only smashing the ideological and cultural infiltration of imperialism but for a most powerful ideological counter-attack to be launched against imperialist and bourgeois ideas.
The ASSPUK and JISGE hailed the publication of Let Us Hasten Final Victory Through a Revolutionary Ideological Offensive as it is a most powerful manifesto of KIMILSUNGISM-KIMJONGILISM. Moreover it shows the correct way to build socialism namely through ideological work rather than by certain other methods which have proved disastrous. The Korean revolution and People's Korea of Juche are marching forward under the glorious banner of the Red Flag whilst others have fallen by the wayside or even betrayed the cause of socialism.  The work "Let Us Hasten Final Victory Through a Revolutionary Ideological Offensive" is just like an ideological nuclear deterrent which will blast away imperialism and capitalism.
Since the publication of the work "Let Us Hasten Final Victory Through a Revolutionary Ideological Offensive"  the Korean revolution has steamed ahead at breakneck speed , a new Korean speed with miracles in construction bring wrought every day . The satellite of Juche has soared into the skies conquering space and the H bomb was tested sending shudders down the spines of the imperialists. New buildings such as Mirae Scientists' Street  and Rymyong Street have sprungup.
Today under the banner of great KIMILSUNGISM-KIMJONGILISM the Korean people are waging a fierce ideological offensive against the imperialists to defend socialism and build a powerful and thriving socialist country.  The Korean people will smash the imperialist sanctions with the spirit of self-reliance and the self-development first idea .The people of the DPRK are firmly united around dear respected Marshal KIM JONG UN and the Workers Party of Korea . They know no other leader and will resist all attempts at regime change  by US imperialism and big power chauvinism .Led by dear respected Marshal KIM JONG UN  the Korean people will be ever-victorious !
We recommend a deep study of the work
http://www.uk-songun.com/index.php?p=1_467_-Let-Us-Hasten-the-Final-Victory-through-a-Revolutionary-Ideological-Offensive-