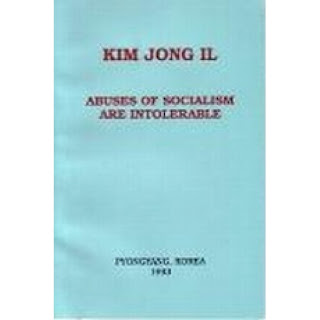 London 28 February Juche 107 (2018)
The Association for the Study of Songun Politics UK (ASSPUK) and the Juche Idea Study Group of England (JISGE) today issued a statement on the occasion on the 25th anniversary of the publication of the "Abuses of Socialism Are Intolerable " by the great leader comrade KIM JONG Il;
It was 25 years ago that the great leader comrade KIM JONG IL authored his classic treatise  "Abuses of Socialism " to refute the slanders and abuse of socialism by the imperialists and world reactionaries following the counter-revolutions in some countries.
The work "Abuses of Socialism Are Intolerable " heralded a bold and decisive ideological counter-offensive against the slanders of the anti-socialist forces who took advantage of the frustration of socialism in some countries. As leader comrade KIM JONG IL explained

"The collapse of socialism in many countries was an outcome of the conspiracy and collusion by the imperialists and counterrevolutionary forces and a result of the ideological and cultural infiltration of imperialism and of the corrosive action of Right opportunist ideas. Decisive to the collapse was the role played by the counterrevolutionary schemes of the renegades of socialism in those countries. In order to stifle socialism the imperialists have for a long time been perpetrating every manner of destructive move such as aggression and pressure, blockade and appeasement; at the same time, they have used as their stooges the degenerates and traitors to the revolution who appeared in the upper strata of the communist and working-class movement. As the history of the international communist movement shows, all the ideological confusion and all the twists and turns within it are due to the fact that renegades of the revolution have appeared in its upper strata"
This is a most profound analysis of the frustration of socialism that shows that this come about as a result of the actions of the imperialists aided and abetted by the renegades and traitors, the Right opportunists who served as the agents of imperialism in the international communist movement.           The great leader comrade KIM JONG IL in the work demolishes the lies of the bourgeois propagandists about socialism. As he says
" It is sophistry to call socialism “totalitarian”, “barracks-like” and “administrative and commanding”.

Totalitarianism served as the political idea of fascist dictators. Notorious Hitler in Germany and Mussolini in Italy used totalitarianism as an ideological tool to justify their fascist dictatorship. The fascist dictators stamped out even the most elementary democratic freedom and rights of the masses of the working people and enforced unprecedentedly tyrannical policies, behind the misleading name of “national socialism”, claiming that for the sake of the whole nation and the whole state no working-class movement and no class struggle could be permitted. The reactionary nature of totalitarianism is that the interests of the working people are sacrificed for the sake of the rapacious interests of the reactionary ruling class under the pretence that the individual should be subordinated to the whole. What is meant by the whole in totalitarianism is not the whole of the popular masses but a tiny handful of privileged circles such as monopoly capitalists, major landowners, reactionary bureaucrats and warlords. Calling socialism, under which the popular masses are the masters of everything, “totalitarianism” is, ultimately, a preposterous lie which identifies the most progressive idea that reflects the demands of the popular masses with the reactionary idea of fascist rulers.
Denouncing socialism as being “barracks-like” is also absurd. The social way of life is defined by ideology and varies according to the social system. Socialism is the most progressive of ideas that reflects the intrinsic demands of people, and the socialist system is the most advanced of systems under which the popular masses enjoy an independent and creative life to the full. The restraint of their independence and creativity occurs not under the socialist system but under the capitalist system. Capitalist society, where the working people are the slaves of capital, cannot ensure a fruitful life, independent and creative, for them. Claiming that socialism is “barracks-like” is pernicious propaganda that attempts to turn black into white."
Thus the great leader comrade KIM JONG IL  hits the nail on the head .
This work of the great leader comrade KIM JONG IL gave fresh inspiration to the world revolutionary people aspiring for socialism whose hopes had been crushed by the modern revisionists betrayal of the socialist cause. It was and is a bright beacon for the revival of the world socialist movement.
The work "Abuses of Socialism Are Intolerable " is as relevant as when it was published 25 years ago. It is vital reading for Juche Idea followers and friends of People's Korea that should be read over and over again.