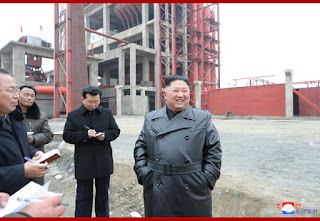 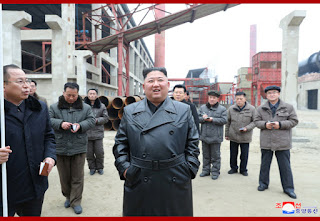 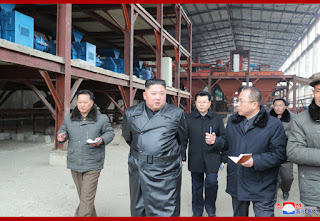 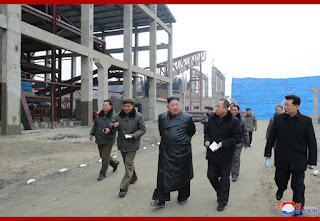 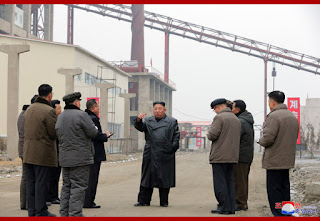 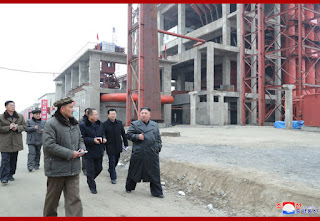 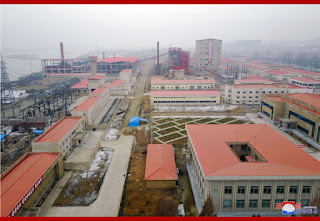 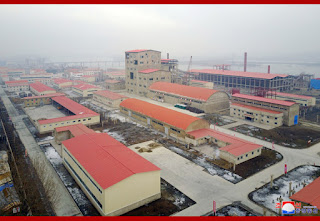 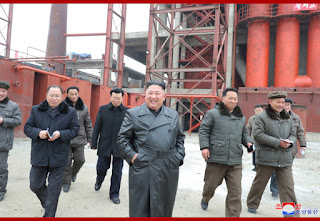 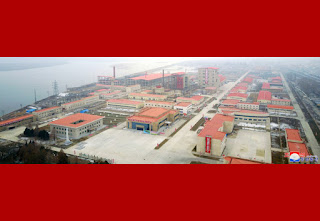 Pyongyang, January 7 (KCNA) -- Kim Jong Un, chairman of the Workers' Party of Korea, chairman of the State Affairs Commission of the Democratic People's Republic of Korea and supreme commander of the armed forces of the DPRK, gave field guidance to the Sunchon Phosphatic Fertilizer Factory under construction.

He was greeted on the spot by Premier Kim Jae Ryong, Minister of Chemical Industry Jang Kil Ryong and officials of the construction headquarters of the Sunchon Phosphatic Fertilizer Factory.

At the seething construction site he said he feels more reassured to see the mettle of the revolutionary struggle of our reliable scientists, technicians and workers who are carrying out by their own efforts and technology such a difficult construction almost beyond their power as breaking new ground in the development of the chemical industry of the country, bearing in mind the Party's idea of achieving prosperity by dint of self-reliance which means that the creation and construction should be conducted our own way and by our own efforts, and reiterated the important significance of the construction of the Sunchon Phosphatic Fertilizer Factory.

He said with great satisfaction that officials and builders of all the units in the construction are working hard in the van of the offensive for making a breakthrough head-on in support of the great plan and intention of the Party for the building of an economic power.

He appreciated the labor feats of the officials and builders, saying that he is deeply grateful to them and hopes it will be a front on which they will be the first to make a breakthrough and put up the flag of victory this year when the Party set forth a great idea of the offensive of making a breakthrough head-on and the news of their struggle will give unlimited strength and encouragement to worksites of the country to effect a great upswing.

To go ahead with such an important work as establishing a modern industry capable of mass-producing high concentration ammonium phosphate fertilizer by our own efforts, technology and manpower from A to Z is a good attempt which fully conforms with the Party's idea and intention of launching the offensive for making a breakthrough head-on and we should continue to make excellent results by dint of such a struggle based on self-reliance, he said.

He said to automate all the elements and processes of a modern phosphatic fertilizer factory under construction and to build it into a labor-saving industry should be chosen as an intentional goal, adding that great attention should always be paid to securing the reliability of automatic control system and security of production processes, building up technical forces of the factory and training producers with deep technical knowledge and high skills.

He pointed out that in order to keep the production of the factory going at a high rate it is the most important issue to properly supply raw materials and it is necessary to go ahead with scrupulous economic operation and control and guidance for rapid restoration of apatite mines and take them into full account one by one and push ahead with them in accordance with the policy ratified by the Party.

He stressed the need to scientifically examine issues that have effect on the surrounding ecological environment in the course of the construction and operation of the Sunchon Phosphatic Fertilizer Factory and take measures for scientific settlement.

He said he came to the construction site as the first leg of his field guidance in the New Year with a view to stressing once again that the construction of the Sunchon Phosphatic Fertilizer Factory is one of the projects the Party is paying primary attention to among the economic tasks to be carried out in the year 2020, the first year of the offensive for making a breakthrough head-on, adding that the Party will take an immediate step for the supply of funds arising in the project and give persistent boost to it. He gave an honorable task and showed great trust in the Cabinet, the Ministry of Chemical Industry and the Ministry of Mining Industry so as to go ahead with the project with a stance and viewpoint befitting masters.

He said it is a matter of course that flag flutters in the wind and the fiercer the adverse wind raised by the hostile forces gets, the fiercer our red flag will flutter in high spirits. He pointed out with full confidence that the situation is severe and difficulties crop up in our way, but our ideal and aspiration will surely come true at our hands when we cherish the justness of our great work as the faith, believe in our own strength and steadily display high responsibility, devotion and activeness.

Noting that it is necessary to complete as soon as possible the construction of the Sunchon Phosphatic Fertilizer Factory and the restoration of the apatite mines and keep the production of high concentration ammonium phosphate fertilizer going at a high rate, he expressed the expectations and conviction that all the builders, scientists, technicians and workers will work hard as soldiers in the van of the grandiose offensive for making a breakthrough head-on with ardent patriotic awareness that they also are in charge of agricultural front, the fore front for the defence of socialism. -0-
Posted by juche007 at 14:26