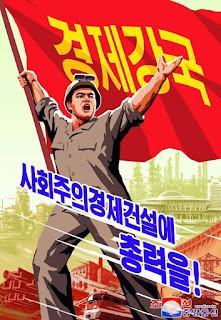 Looking at the conclusions reached at the recent plenary session of the CC WPK, some important decisions were reached on how to proceed with the buildup of the defence forces of the KPA, with international relations and with the tasks of socialist construction in 2020 and throughout the new decade. The Central Committee under the guidance of Chairman Kim Jong Un assessed the objective and subjective obstacles encountered in the advance of the Korean Revolution. During the meeting, the line was put forward on launching an offensive for the frontal breakthrough in developing socialism, A strong emphasis at the CC meeting was stressed on self-reliance and that self-sufficient nature of the DPRK has proven to be the strongest point of the Korean Socialist State. Economic efficiency and technological development as areas of vital importance for the future of the DPRK. The CC session has adopted the slogan "Let Us Break Through Head On All The Barriers To Our Advance."
Upholding the ideological bulwark of socialism has been the key ingredient in the success of the Korean Revolution when other socialist projects have gone to the wall. The Plenary Meeting saw the necessity to intensify the struggle against anti-socialist and non-socialist thoughts and actions among the population. There is always the need to strengthen the motive force of socialism, the popular masses with independent ideological consciousness. There have been futile attempts in recent years to smuggle bourgeois ideology and customs into the DPRK under the guise of "cultural exchange" and "tourism" by certain NGOs.
In reference to the crucial question of DPRK-US relations, the Central Committee meeting stated that the US side was endlessly footdragging and put the negotiations into a stalemate. During the talks with the United States, the DPRK had taken sincere steps towards creating a peaceful atmosphere on the Korean peninsula, suspending all nuclear weapons' and ICBM's tests, while the US increased the number of sanctions on Peoples Korea and escalated the number of military exercises. Kim Jong Un made the point that under such conditions, there is no ground for the DPRK to be unilaterally bound to the commitments undertaken at the various summits with the US. It was pointed out candidly that if there was not the nuclear issue, the US would find fault with the DPRK over another subject. Kim Jong Un called for making a huge leap in the development of strategic weapons' systems which contain the threats from the United States and would push US Imperialism into an impasse before the Songun might of the Democratic Peoples Republic of Korea. The report said that the DPRK wanted a favourable external environment for economic construction, but would never sell out the dignity and independence of Socialist Korea. The DPRK-US conflict has lasted many decades, which has been compressed in a contest between self-reliance and sanctions. So the DPRK is ready both for peace and confrontation, it will not give up its sovereignty and honour, is the message that has come out of the 5th Plenary Meeting of the 7th Central Committee of the WPK.
Stoke On Trent branch of the British Group for the Study of the Juche Idea
Staffordshire branch of the UK Korean Friendship Association
.
Posted by juche007 at 09:25