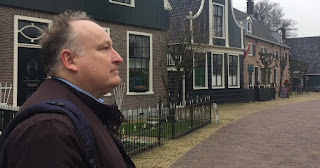 UK KFA over the Coming Months will be publishing profiles or pen portraits of leading activists and why they joined
We start with Dr Dermot Hudson chairman of UK KFA , Official delegate of the KFA for the UK and chairman of the British Group for the Study of the Juche Idea

I first became interested in People’s Korea in the early 1980s when I was looking for an alternative model of socialism as I was shocked by the sellouts by some socialist countries(such as the USSR and Hungary )at the time which did things like joining the IMF and opening a Pepsi Cola plant on their soil . I first read a publication from the DPRK in the autumn of 1983 and then was lucky to acquire some second-hand books from the DPRK in 1985 which included the works of President Kim Il Sung . I was immediately impressed by the content and also impressed by the DPRK’s independence , its anti-imperialist stand , high economic growth rate and social services and benefits . I became a follower of the Juche Idea in 1985 and formed a Juche Idea Study Group with my friends .
My first trip to the DPRK was in 1992 and I have been to the DPRK 18 times .I was impressed , and am still impressed each time I visit the clean streets of the DPRK , the lack of homeless or beggars and the high level of social equality as well the DPRK’s adherence to real socialist principles .
I joined the Korean Friendship Association in 2001 after previously been involved with the old Britain-Korea Friendship Committee , British Committee for Supporting Korea’s Reunification and the Society for Friendship with Korea of the UK. To me KFA was a real breath of fresh air with its militant slogan ‘Defend the D P R Korea’ and its use of the internet for spreading the truth about People’s Korea . There is no half-heartedness with KFA , it is 100 per cent support for the DPRK .
KFA International meetings are always great .
Outside of my work for the DPRK I have other interests such as walking , classic 60s and 70s Dr Who , windmills , old disused railways and I am an Alan Partridge fan .