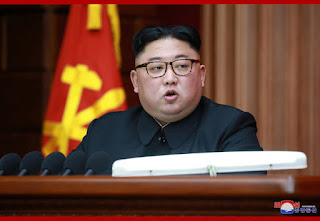 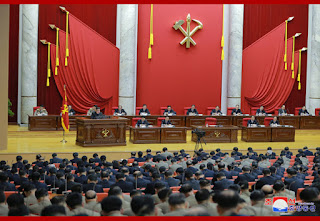 London 23rd of December Juche 109(2020)
The Association For the Study of Songun Politics UK(ASSPUK),the British Group the Study of the Juche Idea (BGSJI),the UK Korean Friendship Association(UK KFA) and the British Solidarity Committee For Peace and Reunification on the Korean (BSCPRKP) issued a joint statement congratulating the Workers Party of Korea on the successful  5th plenary meeting of the 7th Central Committee of the Workers Party of Korea and supporting the decisions of the plenary meeting ;
The historic 5th plenary meeting of the 7th Central Committee of the Workers' Party of Korea (WPK )has now been held in Pyongyang . The WPK is the ruling party of Juche Korea and is the general staff of the Korean  revolution , basically the leading force in society in the DPRK .
The meeting was held over a 4 day period from the 28th of December to the 31st of December . It was attended by members of the Central Committee and also observers from different ministries , institutions and localities in the DPRK .
The purpose of the plenary meeting was to discuss and develop strategies to deal with the intensified attempts of the imperialists to stifle Korean -style socialism through sanctions and military pressure.
The meeting decided to end the DPRK's self-imposed moratorium on nuclear and ICBM tests as the US side had not been sincere in its dealings with the DPRK. At the meeting Respected Marshal KIM JONG UN said a a new kind of strategic weapon will appear. He also stated that "if the U.S. persists in its hostile policy towards the DPRK, there will never be the denuclearization on the Korean peninsula and the DPRK will steadily develop necessary and prerequisite strategic weapons for the security of the state until the U.S. rolls back its hostile policy towards the DPRK and lasting and durable peace-keeping mechanism is built."

The meeting called for enhancing the leading role of the Party , the general staff of the Korean revolution  . The need for an intense Party wide and nationwide struggle against anti-socialist acts and non-socialist acts was also stressed .
A new militant slogan "Let Us Break through Head-on All the Barriers to Our Advance!" was put forward by the meeting .
What the plenary meeting shows is that the DPRK will never surrender to imperialism nor will it be fooled by the imperialists into doing deals which will sign away its independent self-defensive capabilities. It was a great event that  has dealt a great blow to the enemies of the DPRK open and hidden who want to destroy the DPRK either through sanctions or through tricks to bring about 'reform' and 'opening up'.

Our organisations salute the holding of the 5th Plenary meeting of the 7th Central Committee of the WPK   We fully support  the conclusions reached at the meeting We are sure that the decisions taken will lead to the building of a self-reliant great socialist country of Juche ! Final victory belongs the great Workers' Party of Korea led by respected Marshal KIM JONG UN.