DISARMED PEOPLE? NOT IN DPRK!-article from KFA Brazil 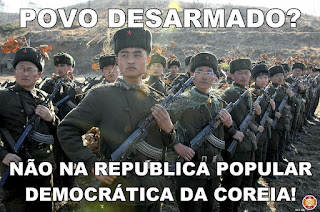 DISARMED PEOPLE? NOT IN DPRK!

Much is said by the imperialists that the communists argue that the people are unarmed. In order to establish a dictatorship and not risk armed people's uprisings. And with the DPRK is no different. They say, but as always, without any foundation, that the people cannot take up arms, and thus cannot react to a "dictatorship". But what really is in it?

To state something of this kind is, first of all, to the listener, meaningless. After all, even if you are not a student of the subject, you know that the DPRK is a country that attaches great importance to military affairs and its army.

Due to the situation of constant threat and tension with the West, all the people in the DPRK are trained to be prepared to go to war at any time. And the question is: Is unarmed a people that has close ties to their army, composed of almost the entire population?

In addition, we must also mention the existence of the civil armed forces. The Red Worker-Peasant Guard is a paramilitary force created by President Kim Il Sung, on January 14, 1959. It is made up mostly of peasants and, therefore, has more operations in rural areas. They conduct their training according to their organizations in each province, and receive the armaments from the Department of Military Affairs. However, they have less control over them than the KPA. They also take part in the military parades, also bringing agricultural equipment adapted to actual war confrontation, showing great creativity. They also developed several missile launchers for themselves.

We also have the Red Youth Guard. That is also a paramilitary organization, volunteer of students, who perform their duties for national defense as well as their basic duty to study. It was founded in 1970 also by President Kim Il Sung. Their important duty is to defend the peasant front with the Red Worker-Peasant Guard if the aggressors start a war.

General Kim Jong Il said:
"The columns of the Worker-Peasant Red Guards and Young Red Guards should follow the columns of serving soldiers. The Worker-Peasant Red Guards and Young Red Guards are paramilitary forces organized in line with our party's policy of arming the entire population. It will be good to include these columns in the parade so that we can demonstrate what our paramilitary forces, as well as our regular army, look like. Only in our country would these forces take part in such a parade."

We see, therefore, that of "unarmed people" there is nothing in the DPRK. More than weapons, they are also armed with a powerful ideology, which, as we have seen, was superior to any military technology used by aggressors in the past.