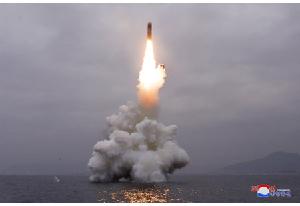 Pyongyang, October 3 (KCNA) -- The Academy of Defence Science of the Democratic People's Republic of Korea succeeded in test-firing the new-type SLBM Pukguksong-3 in the waters off Wonsan Bay of the East Sea of Korea on Wednesday morning.

The new-type ballistic missile was fired in vertical mode.

The test-firing scientifically and technically confirmed the key tactical and technical indexes of the newly-designed ballistic missile and had no adverse impact on the security of neighboring countries.

The leading officials of the Workers' Party of Korea (WPK) and in the field of the national defence scientific research who guided the test-firing on the spot informed the WPK Central Committee of the result of the successful test-firing.

Supreme Leader Kim Jong Un sent warm congratulations on behalf of the Central Committee of the WPK to the national defence scientific research units involved in the test-firing.

The successful new-type SLBM test-firing comes to be of great significance as it ushered in a new phase in containing the outside forces' threat to the DPRK and further bolstering its military muscle for self-defence. -0-
Posted by juche007 at 00:16