A trip on the Pyongyang Metro -by Dr Dermot Hudson 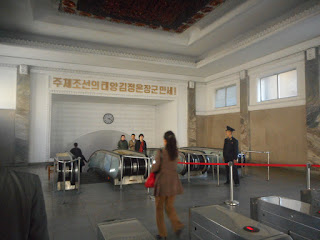 On the last day of our recent visit to People's Korea (from the 7th of October to the  15th of October 2019)we went for a ride on the Pyongyang Metro . Of course it was not the first time that I had been the Pyongyang Metro. We left the hotel in our minibus. With me was the rest of the delegation of the Juche Idea Study Group of England and Juche Idea Study Group of Scotland and our guides  Mr Jong   .We  were joined by the Italian delegate Marco and his guide also called Miss Kim . Our minibus sped through the autumnal streets of Pyongyang until it reached a Metro station in a residential area, some way from the hotel.
We stepped out of our minibus and into the station .The station was clean and orderly .It had ornate decorations adorning the wall and revolutionary slogan on the entrance to the escalator Unlike London there was no sign of homeless people begging outside the station or sleeping outside the station , recently I encountered a lot of homeless people outside of Charing Cross underground station.  We passed through the barriers. 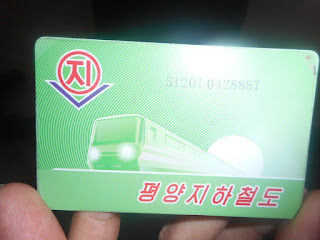 The Pyongyang Metro is the cheapest and deepest in the world. A ticket is only 5 won which is the equivalent of about 3p in British currency .The price is unchanged since at least September 2012 , some seven years. In fact in terms of British currency equivalents I believe that the price is still actually the same as when I visited People's Korea in May 1992 , this is something to really marvel at when you think about the amount of times that that tube and bus fares in London have increased. In London the minimum cash fare on the tube is £4.90 which is 163 times the ticket price on the Pyongyang Metro !. In capitalist countries like Britain everything costs too much and even the basics like food ,transport and housing are astronomically dear  yet in the DPRK a metro ticket is incredibly cheap and a bottle of beer is about 50p or 60 per.  The DPRK is indeed a people's paradise , a socialist paradise . 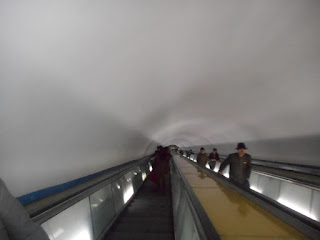 We descended to the underground railway . It was one of the longest escalators that I have ever been on. The walls plastered and painted white .They look clean and fresh . In the background DPRK revolutionary music was playing. In Pyongyang there is no rule about standing on the right and walking on the left. There was a complete absence of advertising. This was striking because in London we have grown all too accustomed to seeing adverts on the walls even as we just go down the escalators.Nowadays even the escalator stairs themselves have adverts on them ! We forget how crazy this .Usually the adverts are for things people do not really need or cannot afford or both !. 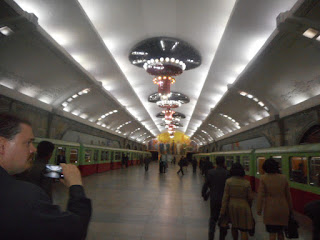 After getting off the escalator we walked through a spacious and wide tunnel .Again there was no advertising . It was spotlessly clean . Some people say that you can eat your lunch off the floor of the Pyongyang Metro !.There was no sign of graffiti or vandalism  nor was there any hint of disorder or hooliganism .Soon we reached the platforms, However the word 'platform' really does not do justice to what was in front of us ! It was positively palatial , indeed an underground palace for Pyongyang's commuters .I can remember first visiting the Pyongyang Metro in May 1992 and how the Portugese delegation let out a gasp when they saw the beautiful , cavern like station in front of them. The platform was very wide  with the train tracks on either side with plenty of space for the passengers . There were finely polished marble columns and chandeliers . On the walls opposite the train tracks there were beautiful artistic murals. Again the floor was very clean. All this for just 3p  ! . 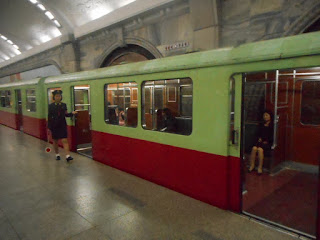 Two girls in smart blue uniforms ensured the safety of passengers. The Pyongyang Metro apparently has excellent staffing levels and unlike the London underground it still has ticket offices . No crazy austerity here or cutbacks and reductions in staff numbers ! We boarded a light green and red train. Some passengers kindly gave up their seats for us .Koreans are very polite and courteous people . The train did not seem overcrowded. I looked the portraits of the great leader President KIM IL SUNG and great leader comrade KIM JONG IL . We went two stops and got out . We took some photographs. We noticed that there were the latest daily newspapers such as Rodong Sinmun were available to read on stands on the platform. I noticed a picture of our delegation at the Party foundation monument in
Rodong Sinmun  . To my slight surprise instead of leaving the station as we had done on previous visits we boarded another train. It is a myth of Western, imperialist , bourgeois propaganda that there are only two stations on the Pyongyang Metro , this is another lie of the imperialists  !!! I was told it is planned to extend the Metro to Kwangbok street in the south of Pyongyang and to West Pyongyang and extending the Metro to the airport is not ruled out . 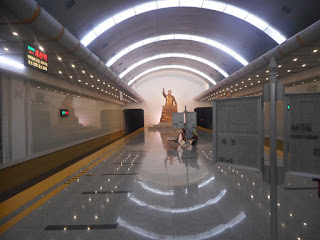 We traveled by train to Kaeson Station which is been reconstructed and modernized . The station has a statue of the great leader comrade KIM IL SUNG at one end of it . It also has the revolutionary murals . However the platform was new and there were electronic displays not only giving train information but also the current temperature in Pyongyang . It is noteworthy that the station had been modernised without fares being massively increased to pay for it , this is due to the people-orientated policy carried out by respected Marshal KIM JONG UN and the Workers' Party of Korea . We ascended the escalators . The station had not only a ticket office but two shops one selling general products and the other was a very well stocked bookshop.  We came out in the open air and found ourselves facing the magnificent Arch of Triumph . 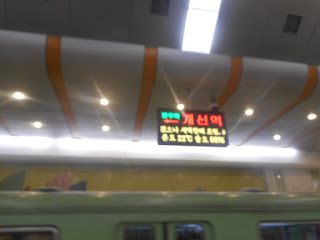 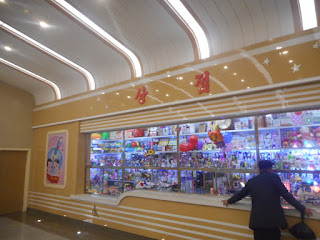