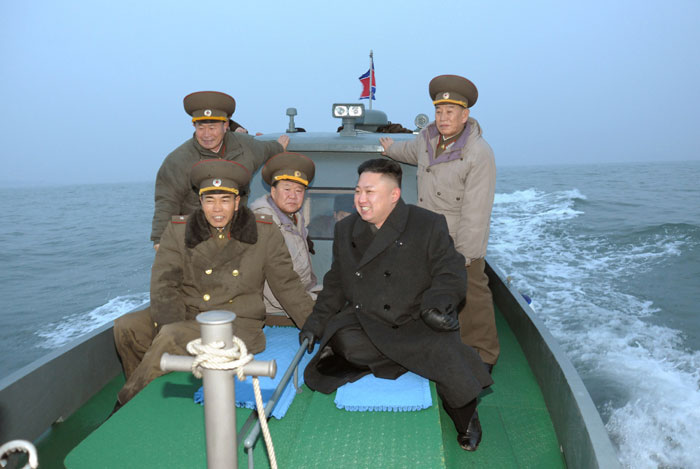 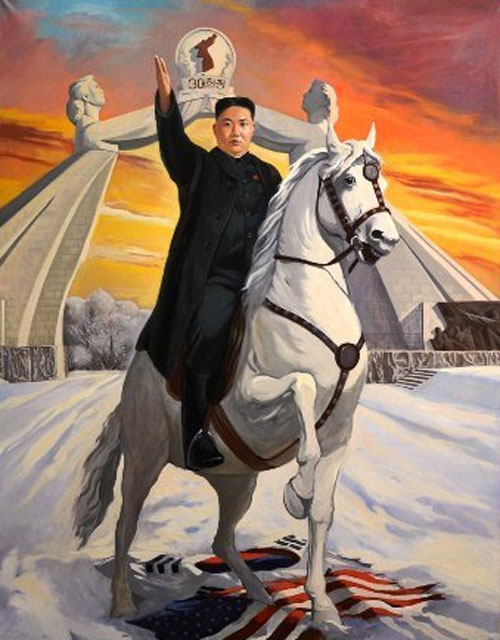 On  the 30th December it will be 2 years since dear respected Marshal KIM JONG UN was elected by the political bureau of the Workers' Party of Korea to the position of supreme commander of the Korean People's Army following the behest of the great leader comrade KIM JONG IL  of the 8th of October 2011.

Since his appointment as KPA Supreme Commander dear respected Marshal KIM JONG UN has distinguished himself as an iron-willed brilliant commander of Songun , another great general of Mt Paektu.
The dear respected supreme commander Marshal KIM JONG UN has shown great commanding ability and skill in the past two years. It is a fact that the Korean peninsula is an arena of acute confrontation between  imperialism and socialism where US imperialism and the socialist DPRK have guns levelled at each other . The Korean People's Army is not only the guardian of the independence, sovereignty and people-centred socialist system but also world peace and the destiny of world socialism. The eyes of the world's progressive and revolutionary people are on the Democratic People's Republic of Korea  the remaining bastion of true socialism which the US imperialists and world imperialists seek to smash down and extinguish by means of force . Thus when dear respected Marshal KIM JONG UN took the baton of supreme commander of the KPA from the great generalissimo Kim Jong Il he assumed responsibility not only for the defence of the DPRK but for the defence of world socialism.
Dear respected Marshal KIM JONG UN on the 1st of January 2012 visited the historic Seoul Guards Ryu Kyong Su no 105 Tank Division of the KPA which signalled his intention to continue in the footsteps of the Songun revolutionary leadership of the great generalissimo Kim Jong Il. The Seoul Ryu Kyong Su 105 Guards Tank Division of the KPA( which was the first KPA tank unit to liberate Seoul in June 1950 hence its title ) is the place where on the 25th of August 1960 leader Kim Jong Il began his Songun revolutionary leadership . Nowadays the 25th of August is the Day of Songun in the DPRK.
Supreme Commander Marshal KIM JONG UN visited various front-line units which are under the nose of the Yankee imperialist enemy including those in the West Sea . Dear respected Marshal KIM JONG UN has visited the Mu and Jangjae islands not once but three times !. The West Sea is the region in Korea where the tension is most acute  , as it was here that serious military clashes occured in 1999 and 2002 and in November 2010 the south Korean puppets provoked the Yongphyong Island incident which resulted in the south Korean puppets being showered with fire by the victorious KPA . 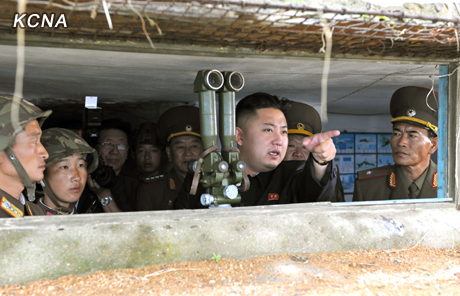 Dear respected supreme commander Marshal KIM JONG UN even visited Jangjae and Mu islands on the 7th of March 2013 when owing to the provocations and extreme pressure of the US imperialist aggressors the clouds of war were threatening to engulf the land of the Morning calm.
The respected Marshal explained "this is not only the biggest hotspot in waters off the Korean Peninsula but a very sensitive area on which world attention is focused and where interests of many countries are intertwined. He ordered the soldiers of the detachments to watch every move of the enemy with vigilance and promptly deal deadly counter-blows at him if a single shell is fired on the waters and land where the DPRK's sovereignty is exercised and thus make the first gunfire and shoot a signal flare for a great war for national reunification. He said all the service personnel of the ground, naval, air and anti-air and strategic rocket forces including the front-line units are fully ready to fight a Korean style all-out war, adding if the enemy makes any slight reckless provocation against the DPRK again in the sensitive waters, he will issue an order to start the just great advance for national reunification in all frontline areas, never missing the golden opportunity." (as reported by KCNA ).  It was a brave and daring act for the supreme commander to visit the area at that time.
In March and April  the tension in Korea had become so great that many assumed that the outbreak of a second Korean war was only a matter of time . The DPRK had successfully launched the Kwangmysong 3-2  on the 12th of December 2012. This should have been a matter of congratulation but instead the US imperialists and other reactionaries responded by using their marionette organisation the UNSC to impose  a reactionary brigandish  UNSC resolution 2087 against the DPRK. Dear respected Marshal KIM JONG UN lost no time in taking measures to counter the sanctions and oppression of the US imperialists and their satellite states. On the 12th of February 2013 the DPRK conducted a self-defensive nuclear test . This was a nuclear thunderbolt of Songun which shook the imperialists rigid .
The US imperialists and south Korean puppets along  with some satellite states of the US mobilised under the deceptive "UN Command "  conducted huge military exercises in south Korea in March and April , Then they concocted another anti DPRK UNSC resolution . Under the command and leadership of dear respected Marshal KIM JONG UN the Korean people hit back hard with a number of decisive countermeasures ; the nullification of the Korean Armistice Agreement , cutting of the military hot-lines between the DPRK and south Korea and the shut-down of the Kaesong Industrial Zone. These measures terrified and perplexed the US imperialists . In a bid to try and regain lost prestige the US imperialists sent 2 B2 nuclear bombers to Korea and had them make flights across Korea in an attempt to intimidate the DPRK and to force it to disarm. Dear respected Marshal Kim Jong Un immediately called a meeting of the KPA Supreme Command on March 29th and drew up an operational plan to strike back hard at the United States. He put his signature on the operational  plan and ordered the Strategic Rocket Force of the KPA on standby to hit the  U.S. mainland, their stronghold, their military bases in the operational theatres in the Pacific, including Hawaii and Guam, and those in south Korea. 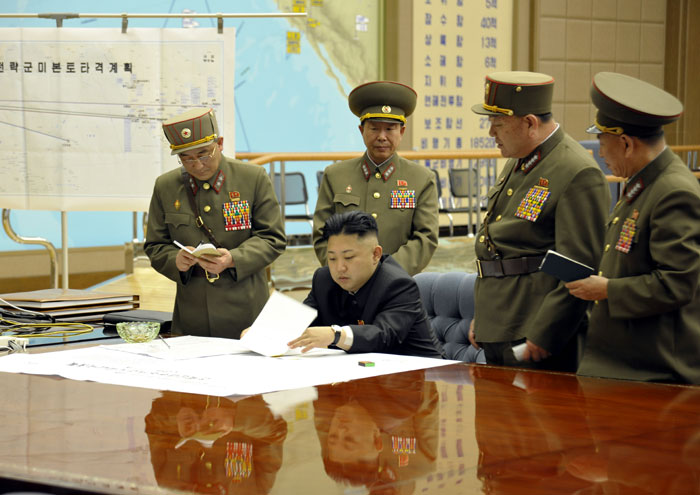 The measures taken by supreme commander Marshal KIM JONG UN threw the US imperialists into fear and panic, They even postponed the test of their missile the "Minuteman " lest it be seen as a provocation to the DPRK. The hard-line stance, the revolutionary anti-imperialist stance of the DPRK under dear respected Marshal KIM JONG UN set an example on the world stage of confrontation with US imperialism.  It is pertintent and relevant to make a few comparisons, though some will quibble . Firstly , there is a historical  comparison ; in 1962 the USSR had supplied a few missiles to the Republic of Cuba , this was detected by the US imperialists who arrogantly demanded their withdrawal and threatened a nuclear strike if the missiles were not removed. The USSR , despite being a big country with nuclear weapons and large armed forces, under the leadership of the cowardly modern revisionist Khruschov capitulated to the US demand within 6 days like a chicken running away from a fox !. More recently a certain big country declared an Air Defence zone in order to assert and maintain sovereignty. The US imperialists believing  themselves to the masters and rulers of the Asia-Pacific region flew B52 nuclear bombers in the airspace of the country concerned , however this big country merely monitored the flights and took no action whatsoever . Thus the DPRK under dear respected Marshal KIM JONG UN stands up for itself and upholds a revolutionary anti US, anti imperialist line unique in the world.
As the supreme commander of the Korean People's Army dear respected Marshal KIM JONG UN has maintained the Songun traditions of army-people unity and comradeship and unity between officers and men. He has shown deep care for the soldiers . When visiting front-line units  the soldiers and their families welcomed dear respected Marshal KIM JONG UN like a close relation . Such unity is never seen in the capitalist world. 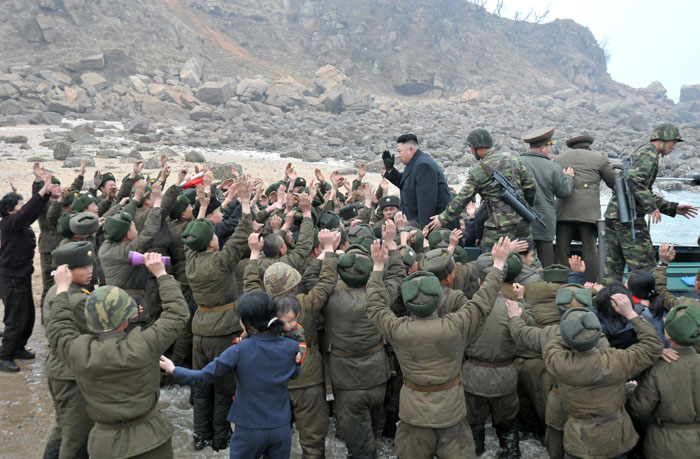